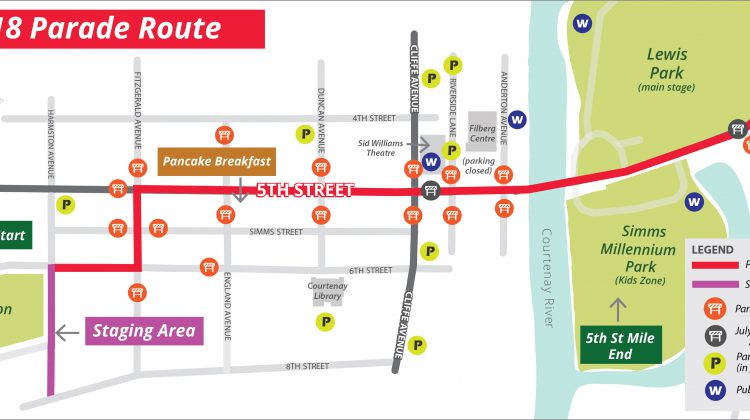 The parade route through downtown Courtenay on Canada Day. Image from City of Courtenay website

COURTENAY, B.C. – Courtenay is celebrating Canada’s birthday on July 1, and with that, comes road closures.

A few downtown roads will be closed to accommodate Canada Day celebrations, the City of Courtenay notes on its website.

Vehicles will need to detour around the parade and celebration route, and will not be able to cross 5th Street within the closure area.

Motorists are advised to plan an alternate route and leave extra time to compensate for heavier traffic on the 17th Street Bridge.

Work on one of Courtenay’s major arterial routes will happen later than originally scheduled.

Repaving on 17th Street between Cliffe and Fitzgerald Avenue, first slated for July 3 to 5, has been rescheduled by the contractor.

It will now happen from Monday, July 9 to Thursday, July 12.

Once paving starts, roadways will be subject to intermittent lane closures and single-lane alternating traffic during construction hours.

There will be noise generated by the crew and equipment, and any on-street parking will be restricted during construction. Motorists are advised to use caution and obey traffic personnel and posted traffic signs.

During repairs, the existing pavement surface will be ground up, removed, and replaced with new asphalt.

According to the City of Courtenay, “this cost-effective method of road repair can be performed when the road surface is damaged but the sub-base is stable and underground utilities don’t yet need replacing or upgrading.”

The project is part of the City’s long-range asset management planning, which prioritizes repairs based on a thorough condition assessment of roads throughout the city.