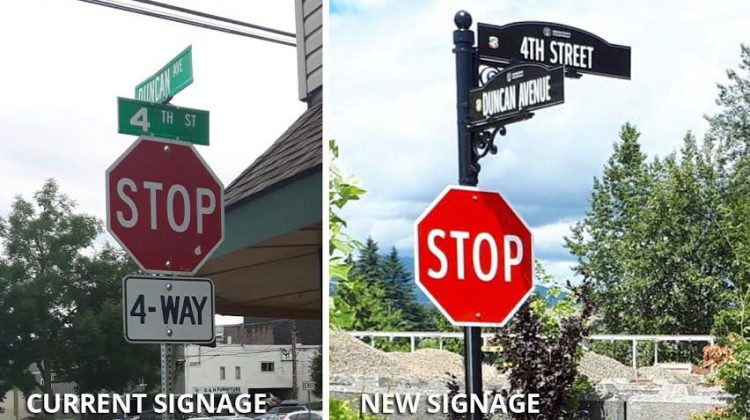 Signage upgrades are part of the 4th Street Improvement Project. Photo courtesy of the City of Courtenay

COURTENAY, B.C. – The face of 4th Street in downtown Courtenay is about to change.

City of Courtenay Public Works Services will begin upgrading the Cliffe Avenue and 4th Street intersection on Monday, July 9 to improve pedestrian safety and beautify the streetscape, according to a city release.

Work is expected to continue through the month of July.

Improvements to 4th Street include:

Kyle Shaw, the City of Courtenay’s Manager of Transportation and Utilities Maintenance, said the improvements were developed in consultation with the Downtown Courtenay Business Improvement Association (DCBIA).

“We’ve held a number of meetings over the last 18 months with the DCBIA, including a ‘walkabout’  this past spring to develop specific concepts for improvements,” Shaw said.

“This upcoming project is the beginning an annual program to enhance the downtown core, with upgrades that will reflect Downtown Courtenay’s unique and vibrant identity.”

The improvements also align with recommendations from the Downtown Courtenay Playbook finalized by the City of Courtenay in 2016.

ICBC has contributed $13,500 towards the construction of the four-way stop at 4th and Cliffe as part of their Community Road Safety Improvement Program.

Work will take place between 6:00 a.m. and 6:00 p.m. every Monday to Friday for the duration of the project. Vehicle traffic and on-street parking will be restricted within the work area.