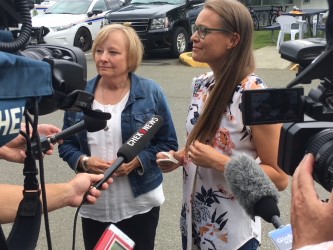 The question has haunted Lindsey Nicholls’ loved ones for a quarter of a century.

But Lindsey’s mom isn’t giving up on finding answers.

With the 25th anniversary of Lindsey’s disappearance fast approaching, Judy Peterson has put up billboards in Comox Valley to draw attention to the case of her missing daughter.

“We decided we wanted to mark the anniversary of the 25 years in some significant way,” Peterson said during a press conference Wednesday at the Comox Valley RCMP detachment. “The billboards allowed us to mark the anniversary and also to bring awareness to the community, to make sure the community knows that Lindsey is still missing, and that somebody does know something, and to hope that it will trigger a memory and that (someone) will phone in any piece of information.”

One of the billboards is located south of the Royston highway intersection, close to where Lindsey was last seen.

The RCMP suspect foul play, but the case remains unsolved.

Peterson is convinced someone has information about Lindsey’s disappearance.

She’s hoping the billboards will trigger memories and generate tips.

“Someone knows something. We hope that this exposure will convince them to come forward and provide the last piece of the puzzle,” Peterson says.

She said if Lindsey was abducted, the person who took her is still out there.

“A really important piece of the file is that it’s unsolved and we don’t know what happened to her, and our family needs to know.”

In the summer of 1993, Lindsay had temporarily moved into a foster home on Royston Road.

The morning that she vanished, Lindsey had gotten into an argument with her foster mother and walked out of the home, apparently to meet friends in Courtenay.

Lindsey had left all her belongings and treasures in her room and her mother felt she had not planned to run away.

She had been wearing jeans, a khaki silk tank top, a blue and pink checkered shirt and white “Esprit” canvas style deck runners.

She had run away in April 1993 and was found at a friend’s residence in Delta. 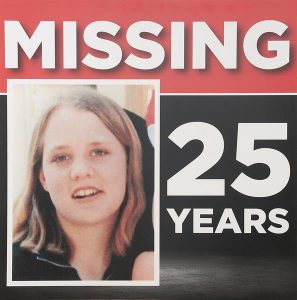 Meanwhile, the investigation continues, and new tips are still coming in “all the time,” Jenkins said.

“The difficult part is keeping this message alive in the community, to say that we want more information,” Jenkins said during the press conference. “Today’s message is, we believe somebody knows something and we’d like those people to come forward.”

Jenkins said investigators hope the billboards will generate more tips in the case and drum up some memories of that time.

There’s a part of Peterson that believes Lindsey is okay.

“But I feel if she had been out there over all this time she would have come forward,” Peterson said. “That’s a tough one.

“I would love to know what happened to her, no matter what it is.”

Missing Children Society of Canada CEO Amanda Pick is in Comox Valley in support of the family.

“I think we’ve seen in the last couple of days since I’ve been with Judy and her family that a missing child affects every single person in a community,” Pick said. “This community stood with Judy when Lindsey went missing, and what Judy and her family and the RCMP are asking today, is stand with them again.

“Somebody knows something, and it is imperative, it is critical that that person or people come forward.”

“We need to find answers. We need Lindsey to be reunited, if possible, with her family,” Pick added.

Lindsey’s sister Kim Nicholls said with her sister’s 40th birthday happening in September, it would be nice to be planning a milestone birthday for Lindsey rather than attending a media event.

“Twenty-five years is a very long time, and I don’t think people understand the impact that this has on our family,” Nicholls said.

“It affects us every single day.”

If you know something about Lindsey’s disappearance, call the Comox Valley RCMP at 250-338-1321.