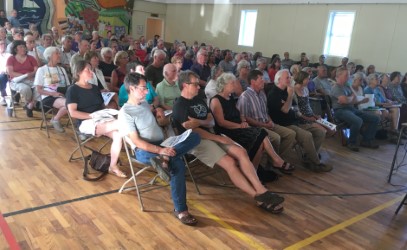 People packed Merville Hall for an information session regarding a couple's plan to extract water from their family well for water bottling purposes. Photo by Troy Landreville/98.9 The Goat/Vista Radio

MERVILLE, B.C. – Residents packed Merville Hall Monday night, for an information session on a local couple’s plan to extract up to 10,000 litres of ground water per day from their family well along Sackville Road.

Most of the attendees opposed Christopher Scott Mackenzie and his wife’s planned water bottling facility. The water licence was issued by the province in November 2017.

Signs reading ‘Water for need not for greed ,’ ‘Don’t sell my well,’ and ‘Water for life not for profit’ rested against walls inside the hall. 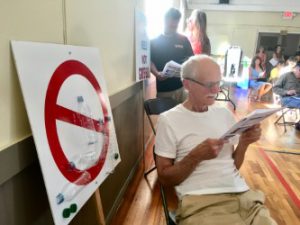 During an hour-long presentation, attendees were told that the pumping of the well on Sackville Road is expected to cause less than three centimetres of drawdown in other wells within 500 metres, and that it is not detrimental to neighbouring properties.

As well, based on studies the current ground water use in the Merville aquifer is less than 20 per cent of the annual recharge.

Provincial representative Darryl Slater told those in attendance that the decision for water authorization is based on beneficial use, water availability, impacts to other parties and the environment, impacts to Aboriginal interests, and other approvals. 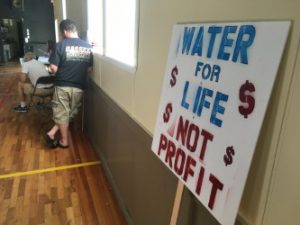 Following the presentation, and during a break before a question-and-answer period, Bruce Gibbons, who’s been a vocal opponent of the operation, told MyComoxValleyNow.com that he didn’t learn any information that he didn’t already know.

“I haven’t seen anything here that really justifies what they’ve done,” Gibbons said. “There’s a lot of technical information, but it’s all desktop analysis. They don’t know anything about that aquifer. They didn’t do pump tests.”

Gibbons said the province is using “18-year-old data” to formulate an analysis, “doing formulas and calculations and not any direct testing to see how you are impacting the community.”

Gibbons, who lives next door to the property, said a worst case scenario would be people’s wells running dry.

“That’s everyone’s worst nightmare when you have a well,” he said. “You turn on the tap and there’s no water. Climate change is affecting everybody. Summers are hotter, dryer, longer, so why would they do this? All the statistics say it looks like we’re okay to do this but why do it? You’re benefiting one guy, and putting the entire Comox Valley at risk. It doesn’t make any sense.”