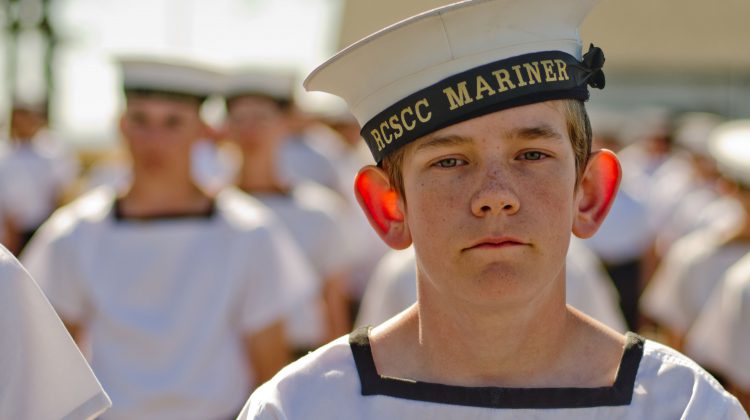 Paul Eamon, a course cadet from RCSCC 307 Mariner, stands on parade during the graduation of two-week course cadets from HMCS Quadra on July 20th, 2018. Photo by James Wood/98.9 The Goat/Vista Radio

HMSC QUADRA – Today (Friday) was graduation day for first-year cadets from across Canada.

During the summer months more than 1,000 cadets from every region of Canada attend HMCS Quadra. Based on age, experience and personal choice of subject matter, cadets take part in training courses of two-to-three, or six or eight weeks in length.

Over the past two weeks the cadets learned seamanship, sailing, marksmanship, physical fitness, and much more.

“GT (general training) is basically a whole bunch of learning experience(s) to decide what you want to do for your next year,” the 12-year-old said.

Seamanship and drill training were just some of the aspects of the course. During her time at the Training Centre, Curtis was drawn to the sailing aspect of training.

This was also Curtis’s first cadet camp and she loved the experience. 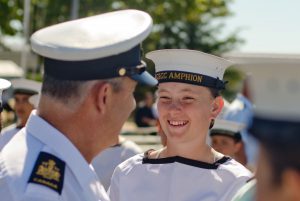 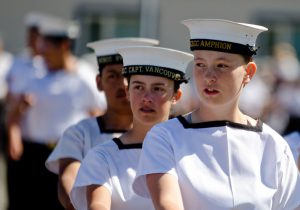 “You get to do a lot of things and it gives you great opportunities, here,” she said.

When she returns to her corps near Nanaimo, Curtis will tell her peers to keep trying to get into Quadra for the opportunities it offers.

“It’s really fun,” she said. “You kind of forget you’re here for so long.”

Curtis was among the cadets who earned a rare opportunity to sit down for lunch with Quadra’s commanding officer.

The cadets were chosen based on their performances within their respective divisions.

Cadets will be training at the site until late August.