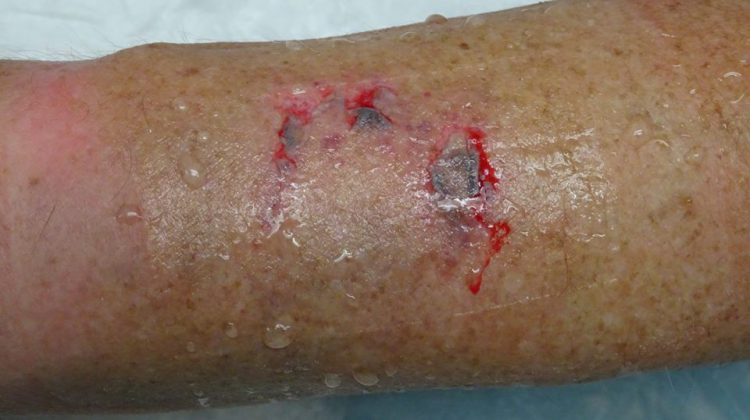 VANCOUVER ISLAND, B.C. – Four kayakers got a lot more than they bargained for during a trip in the Broughton Archipelago earlier this month.

In a Facebook post, Jan Whitehead said that the kayakers were traveling out of a passage through the Canoe Islands, east of Owl Island.

Jan was one of the kayakers.

One of the paddlers, identified as Warrick Whitehead, her husband, spotted a disturbance in the Northern Vancouver Island waters. Initially, this was just thought to be a fish.

A seal then came up from the water and bit another kayaker, identified as Jim, under the arm while trying to pull him from his kayak.

The attack resulted in the kayak capsizing. Jim then kicked at the animal, which left the scene. In the incident, Jim had suffered an injured knee. The seal returned and attacked a woman named Marlene, biting her on the arm and hand.

As Jim was being rescued from the capsized kayak, Marlene hit the seal with a paddle, fending it off. Jan said she was then bit on the lower arm by the seal, suffering an injury to both sides of her arm.

According to Whitehead, her group met up with a commercial group of kayakers from Port McNeill’s Kingfisher Wilderness Adventures. By that time, the seal had left the area.

The group returned to the camping area at Owl Island to assess their injuries.

“We were all wearing drysuits so had to peel them off to see the wounds and bruises,” Whitehead wrote.

She said the group camped at the site that night and paddled into Telegraph Cove the following day.

She noted that Telegraph Cove North Island Kayaks allowed use of their phone to report the incident and report the distressed seal in the area.

Jim and Marlene headed off to Victoria on return from the trip. Whitehead said she went to the Port McNeill Hospital to get a further assessment of her injuries.

Jan and Warrick, who are from Duncan, researched an infection of “seal finger”. The couple went to the Cowichan Hospital, where Jan was prescribed a dose of tetracycline to protect herself from catching any infection.

Jan Whitehead has been contacted for further comment on the incident.

Photo caption: One of the injuries is shown in a photo by Jan Whitehead.