Fencing in Courtenay River estuary expected to stay until winter 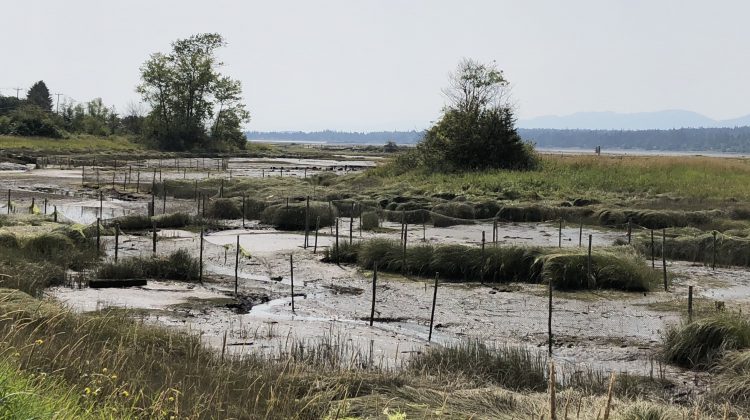 An image of the protective fencing, courtesy of Cory Frank.

COURTENAY, B.C- Motorists along Comox Road will be seeing fencing in the river until cold weather comes.

The fencing is part of a restoration project led by K’ómoks First Nation and the Guardians of Mid Island Estuaries Society. Multiple areas of salt marsh grass, just off the shore of the river on the Comox Road side, have been cordoned off by fencing for around two months.

The fencing is in place to protect the grasses from roving, non-migratory Canada geese.

According to a signpost placed by the project, the geese population has been rising unchecked, impacting river estuaries along Vancouver Island’s east coast.

In the local estuary, the animals have been eating the grass faster than it can grow.
The grass provides habitat for young salmon, and holds in the salt marsh sediment. Once it’s eaten to the point of no return, the sediment begins to fall apart.

The signpost states that the local goose population has risen to 1200 in the last few years, with negative impacts now being noticed.

The fencing is meant to protect the plants.

“Our plan is to, you know, once the geese leave in the fall, or hopefully leave in the fall, then we’ll probably take the fences down in the winter until the geese return again, but this will be an on-going process for, I think we have a permit for five years,” said K’ómoks First Nation Guardian Watchmen Manager, Cory Frank.

More fencing is planned in the next few weeks.