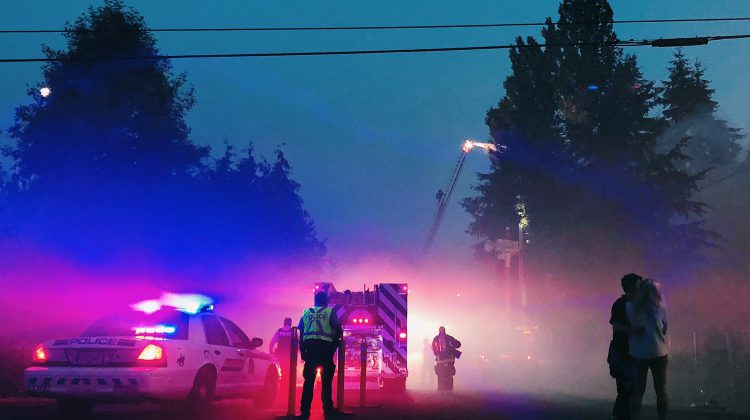 A Comox firefighter comforts a resident of a home along Gull Avenue after a nearby house burnt down on the night of Tuesday, July 24th 2018. Photo by James Wood/98.9 The Goat/Vista Radio

COMOX, B.C- An intense house fire in the Comox Valley has been ruled not suspicious by the local police.

The blaze broke out last Tuesday night around 8:30 p.m., at a home close to the intersection of Robb Avenue and Rodello Street. Dozens of firefighters were sent to respond, as flames gutted the home and scorched surrounding trees.

The neighbourhood around the fire was briefly evacuated, and neighbouring sheds were also damaged.

One firefighter was treated for heat exhaustion at the scene, and a cause remains undetermined. However, the Comox Valley RCMP have announced that the fire is not considered suspicious.

“The fire investigation at the scene of the fire in Comox is complete,” said Constable Monika Terragni, the spokesperson for the local detachment.

“The fire is not considered suspicious and the police are no longer investigating.”