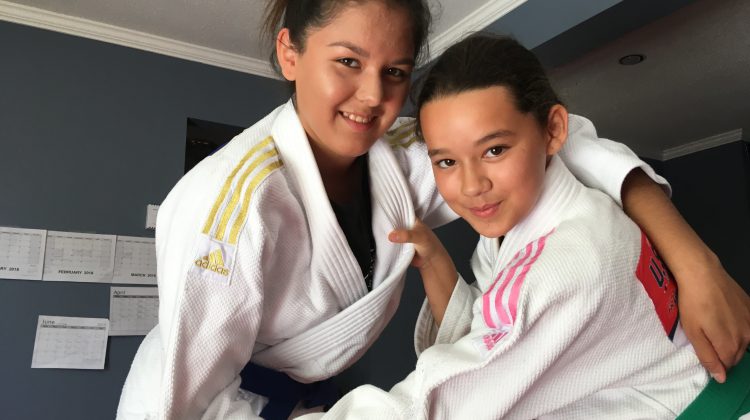 Sisters Makayla and Dakota Sanzana are pictured in their home on August 1st, 2018. Photo by Troy Landreville/98.9 The Goat/Vista Radio

COMOX, B.C- There’s dedication, then there’s spending as many as 30 hours a week driving to Nanaimo to hone your craft.

That’s the commitment a Comox family makes, all for the love of judo.

Dakota, who celebrated her 12th birthday on Wednesday, came home July 31 from Fort Lauderdale, Fla., where she battled to a silver medal in her -42 kg weight division at the U.S. Judo Open Championship.

Dakota won three of four matches to win silver, having to overcome nerves in the match determining the second-place winner.

“I already lost to a girl so I had to fight another girl for second place,” Dakota said.

A green belt, Dakota’s biggest test came in her third match, against a brown belt who was significantly taller.

“I did the best I could but it was pretty hard,” Dakota said. “I was pretty excited.”

It’s been a memorable year for Dakota, who in February took both home team and individual gold medals from the BC Winter Games in Kamloops.

Her older sister Makayla, 14, is also an accomplished judakai athlete.

Makayla placed second at an international tournament in Edmonton in March, just missed the podium at the Canadian nationals in Calgary by finishing fourth, and took third spot at the U.S. Open last year.

She is ranked third in B.C. in her weight group.

Makayla said her goal this year is to reach the podium at nationals.

The sisters’ top placings come from a blend of skill, hard work, and dedication not just from the sisters, but from their parents John and Kellie, as well.

The travelling distance from the family’s home in Comox to the Nanaimo Judo Club is 114 kilometres. It’s a trip they make there and back four and sometimes five days a week under the guidance of instructor Eloy Fiandor.

But the sisters don’t mind. They’re following the lead of their dad, an avid judo enthusiast who achieved brown belt status while he was serving in the military in Chile.

“We like it because of the self-discipline, and being able to protect ourselves,” Dakota said.

Four years ago, John gave them a choice: try judo for two weeks and if they like it, they could continue on but they would have to finish until they achieved their black belts.

“I tried it when I was little but I didn’t like it so he just waited until we were older again,” Makayla said.

“The idea was they started off for self-defence,” Kellie said.

“Competing isn’t even something he (John) even thought about. Once they started competing they really liked it themselves. They get to choose what competitions they go to, which weight categories and stuff like that.”

Makayla said the long-term goal for her and her sister are to get to worlds and, possibly, the Olympics.

“One year at a time,” their mom said.