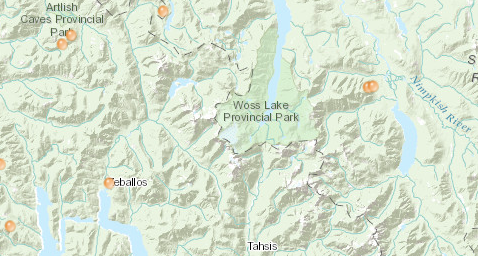 One is located north of Tahsis and Zeballos, in the Kaypit Lake area.

“It’s 20 hectares, we’re working with industry, we’ve got machinery there, so they’re working on that fire,” she said.

Jakobsen said the fire is still considered ‘out of control’, and noted it was one of the fires caused by a lightning storm that came over Vancouver Island last weekend.

A second large fire, listed at 25 hectares, is burning at Vernon Lake, east of the Woss Lake Provincial Park.

Jakobsen said that blaze was also caused by the lightning storm.

“It’s really steep ground, and crews are working again with industry and it’s still out of control as well,” she said.

Jakobsen couldn’t say exactly how many crew members were on scene of the Vernon Lake #2 fire.

This weekend’s lightning storm caused more than 30 fires to spark up across Northern Vancouver Island.

Photo caption: Crews are currently on scene of two large wildfires near Zeballos and Tahsis. Smaller fires are also burning across the North Island. Image courtesy the BC Wildfire Service.