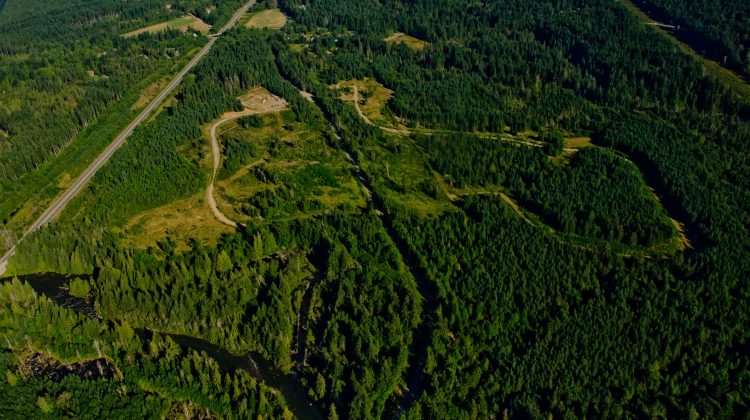 The site of the proposed development is photographed from the air on August 6th, 2018. Photo by James Wood/98.9 The Goat/Vista Radio.

COURTENAY, B.C. – A company will have to wait even longer to see if its bid to develop 530 acres of land near Stotan Falls will get the green light.

The Comox Valley Regional District (CVRD) voted unanimously on Tuesday to adopt a consultation plan about the possible creation of a settlement node for 3L Development’s proposed “Riverwood” project.

The proposed project site close to the fork of the Browns and Puntledge rivers would have 740 homes, a commercial centre, and a self-contained water and sewage system.

The “Appendix A” consultation plan adopted by the CVRD board is intended to provide opportunities for early and ongoing consultation with its citizens, local government, First Nations, the province, and Canada.

The plan also recommends that a meeting between the technical advisory committee and steering committee and 3L be scheduled, to give 3L the opportunity to present their proposal including all information that they wish staff to consider.

As part of the process the public is encouraged to have their say at a public hearing and to attend open houses to learn more about the process and application.

The plan includes a public hearing and an amended consultation process timeline concluded in April 2019.

Appendix A has several components laid out over the next nine months including open houses on Sept. 6 and October or November, a public hearing on Nov. 29, and, if accepted, third reading and final adoption in April 2019.

3L owner David Dutcyvich said he has lived up to everything he said he was going to do.

“We were told by the head planner at that time, that in exchange for 50 per cent of our property as park along the rivers, the Browns and the Puntledge including Stotan Falls, that we would get density equivalent to half acre lots. We went along with that proposal. We spent a great amount of time, resources and money in developing a plan that took into consideration the surrounding development, protecting the parkland, protecting wildlife corridors, as well as looking at our own private water and sewer system so we wouldn’t be dependent on regional system.”

Atwell feels the rug has been pulled out from under the applicants.

“We’ve tried to follow process with this property the whole time, yet we get painted as the bad guys in all this. We’ve complied with all the rules yet no one has stopped and asked us, what are the merits of our application, what are we putting forward before they start condemning us.”

Atwell said “we’re not waiting any longer. Either we get the compressed schedule, or we proceed as per our intentions in April.”

Grant Gordon spoke as a delegation at the meeting and noted that the proposal has been 11 years in the making.

“It’s been 11 years of trying to get around the planning,” Gordon said.

He said there has been no mention of growth nodes in the past regional plans, which he added promised to protect rural assets and greenspaces.

“This proposal is not appropriate,” Gordon said. “It does not support urban containment strategies, it doesn’t provide satisfactory and sustainable servicing for the area.”

Another speaker, Diane Bostock, said her focus is to defend wildlife, and wildlife habitat and corridors.

“This proposal from 3L, in my opinion, goes against the key principles that direct zoning contained in the RGS (Regional Growth Strategy) bylaw,” she said. “The form and character and scale of the consultation plan need to match the scale of the proposal.”

She asked that the board choose the recommendation of option one, Appendix A, which allows for public information sessions “and months more time to inform valley residents, and for them to inform themselves about this process.”

“It’s not an easy process to follow, it’s a story with many twists and turns, and I think the public needs the benefit to be able to have time and consultation with the staff.”