Wildfire near Zeballos is “zero per cent contained” 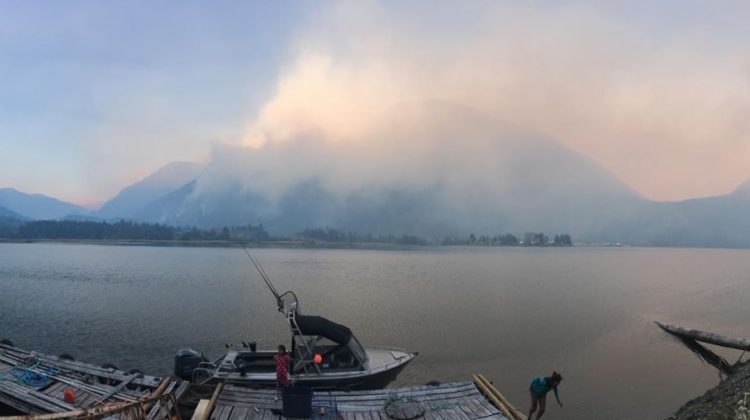 ZEBALLOS, B.C- A wildfire close to the North Island village of Zeballos is burning out of control.

According to Natasha Broznitsky, an information officer with the Coastal Fire Centre, the Gold Valley Main fire is around 10 hectares in size, and is “zero per cent contained”.

The flames had lit up on the outskirts of Zeballos yesterday, on a bluff overlooking the village. The Coastal Fire Centre had indicated that the flames were being bucketed yesterday, with firefighting efforts believed to have continued overnight.

However, the fire has now advanced closer to the community.

A video posted this morning by resident Ernest Smith shows a pillar of smoke coming from the forest directly behind houses, on the hillside adjacent to the village.

“One of the biggest challenges on this fire is that it is burning in extremely steep terrain,” said Broznitsky.

“One of our big considerations on this fire is the safety of the people in Zeballos, and also our crews and how they would work safely on this fire.”

There have been no evacuation orders issued for the area, as of this publication. Broznitsky said those would come from local government.

“In general, the BC Wildfire Service makes recommendations to local governments for issuing evacuation orders and alerts, so certainly one of the things that the officers on that fire will be doing is assessing what is appropriate for the town of Zeballos, and make those recommendations through our fire centre and the local government,” said Broznitsky.

She also indicated more resources being brought into the area would be possible.

“There are number of fires in the area that our crews are making good progress on,” said Broznitsky.

“Depending on what those officers feel is necessary for the fire, there may be more resources assigned to the fire later on today or tomorrow.”

IMAGE CAPTION: A photo of the fire from August 15th, 2018. Image courtesy of Elsie Billy.