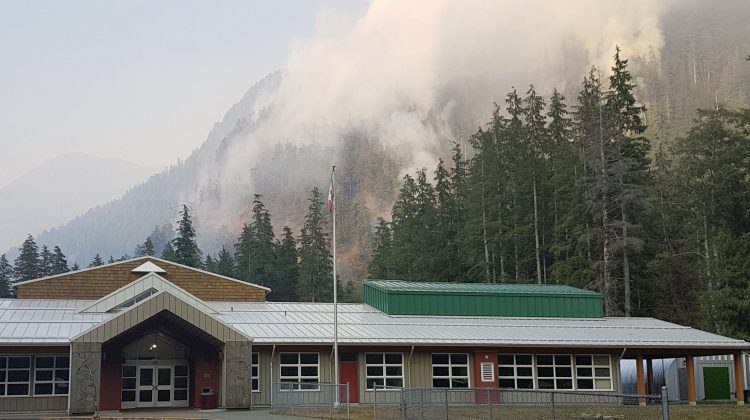 ZEBALLOS, B.C- A state of emergency has been declared in Zeballos.

The announcement comes as a fire titled Gold Valley Main has burnt down a steep bluff close to the small village, which is northwest of Tahsis along Vancouver Island’s west coast.

The flames had lit up on the outskirts of Zeballos yesterday. The Coastal Fire Centre had indicated that the flames were being bucketed yesterday, with firefighting efforts believed to have continued overnight.

As of this morning, the fire had reached 10 hectares in size and was not contained, burning out of control.

Mayor Donnie Cox told MyTriPortNow.com that a state of emergency has been declared, along with an evacuation alert for residents on the village’s east side. Firefighting efforts are ongoing, with a five-person crew from the BC Wildfire Service on the ground and a helicopter in use.

According to Cox, efforts are focused on keeping the town safe, along the lower reaches of the forested slopes, with homes and woods being sprayed down.

“We are just trying to protect homes and structures, and people’s safety at this time,” said Cox.

“The fire continues to burn, up above, and it will burn until we get rain. It is too steep to place personnel on it, and there is too much smoke in the air to effectively drop on the hot spot above the fire.”

According to Cox, the emergency declaration will be useful.

“It lets us do things faster,” said Cox.

“It lets us have the rights and privileges to enlist services of whatever we need, and it allows the province to absorb some of the costs.”

Cox said the evacuation alert was on an “hour by hour” basis, which could turn into an evacuation order.

He also expressed confidence in the firefighters working to protect the village.

“We’ve got our fingers crossed, on one hand, and confidence in our hearts that we’re going to get through this,” said Cox.

No evacuation orders have been issued, as of this publication.