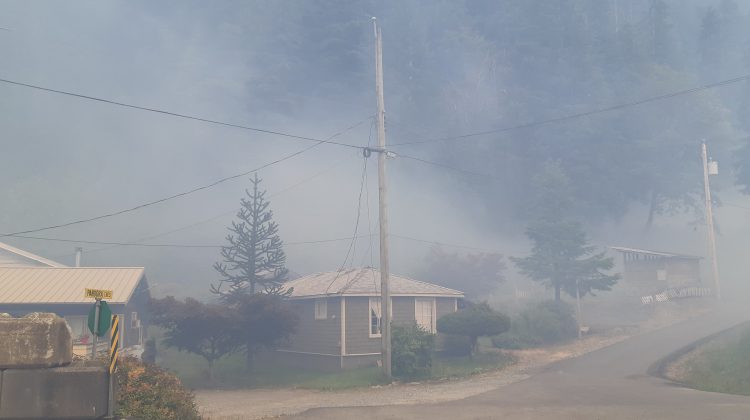 ZEBALLOS, B.C- Smoke is filling the streets of Zeballos as a wildfire continues to burn around the village.

Firefighting efforts have been ongoing since the Gold Valley Main fire began earlier this week, on a steep bluff overlooking the small community on the west coast of Vancouver Island.

The flames have since spread down the slopes into the outskirts of the village, and firefighters have been focused on protecting structures today.

Around 7:00 p.m., smoke was seeping into the streets from the nearby forest, as a heavy-lift helicopter made bucketing runs back and forth from the harbour. All of the homes backed against the mountainside were completely surrounded by the smoke.

Residents were also lined up in front of the community hall for a dinner held to thank the firefighters, with some singing once the meal began. Chuck John, the man who started the song, said it was a dinner song meant to welcome everyone to the meal.

According to the Campbell River Mirror, the BC Wildfire Service incident commander has said that authourities are determining “trigger points” that would be thresholds for ordering an evacuation.

The east side of the village has been under an evacuation alert since Thursday.

The fire is roughly 90 hectares in size, and another fire is burning near the Forest Service Road, the only road that leads out of the village.

-with files from Cole Kelly