Smoky conditions expected to ease by end of the week 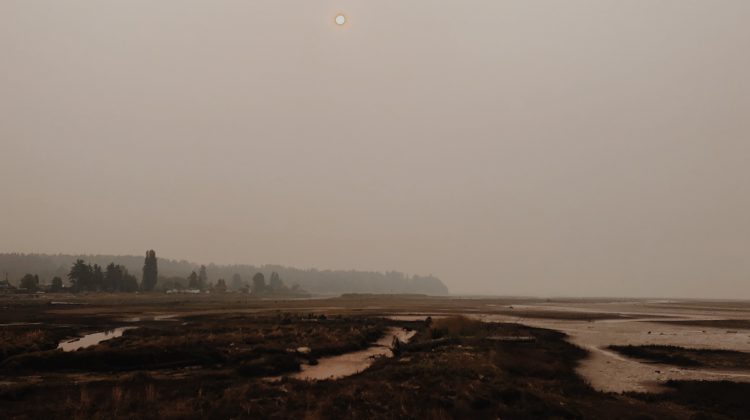 Smoky skies are seen in the Comox Valley on August 20th, 2018. Photo by James Wood/98.9 The Goat/Vista Radio

VANCOUVER ISLAND, B.C- Smoky skies over the West Coast are expected to improve by the end of this week.

According to Lisa Erven, a meteorologist with Environment and Climate Change Canada, current smoke conditions are going to be lingering for the next few days, though the weather patterns in B.C should begin changing by mid-week.

An air quality advisory due to wildfire smoke is currently impacting the following communities.

The north end of Vancouver Island is covered by the advisory as well.

Ash was reported to be falling from the sky in Campbell River on Monday, while smoke was rolling in through multiple coastal communities. Erven said that falling ash could be seen in other areas, though it depended on local smoke concentrations.

She also indicated that the mid-week change would be coming from air from the ocean.

“The weather pattern is looking to shift as we get into mid-week, we could see a bit of a change in the wind pattern from these outflow conditions, switching to more of a marine push,” said Erven.

“That’s getting air off the Pacific Ocean, moving in over Vancouver Island, and further inland, to areas such as Vancouver and the Fraser Valley. Under that shift, we are looking to see an improvement in air quality conditions, however, trying to forecast whether or not we’re going to go straight to clear skies, that’s perhaps a little bit too optimistic. We’re looking at incremental improvements to our air quality, late in the week.”

More than 500 fires are currently burning throughout the province.