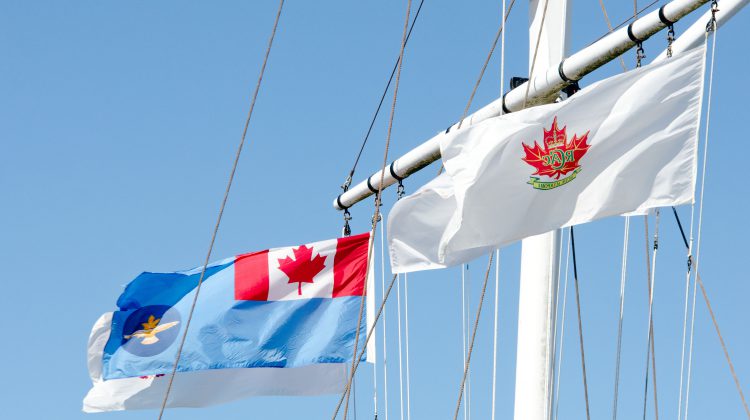 The flags at HMCS Quadra are pictured in a Vista Radio file photo. Photo by James Wood/98.9 The Goat/Vista Radio

COMOX, B.C- A male instructor at HMCS Quadra was sent home from camp this summer.

According to Captain Cheryl Major, the public affairs officer for the British Columbian section of the Cadet program, the instructor was a member of the Canadian Armed Force’s Cadet Instructor Cadre (CIC).

A complaint had been made from a member of the cadet training centre at Quadra in early August, and the man was held overnight by military police after staff “responded immediately”, according to Major.

“At the time of the occurrence, the member was employed at HMCS Quadra Cadet Training Centre,” said Major.

“The member had his contract terminated, he returned home the following day, and has been suspended from working with the cadet organization, pending the outcome of further investigation.”

He was released the following morning.

According to Major, the Canadian Forces takes any incidents like the complaint very seriously, and there is full cooperation with investigators.

“The protection, safety, and welfare of cadets and our staff is our highest priority,” said Major.

“We don’t tolerate any harmful or inappropriate behaviour involving anyone associated with the cadet program.”

Major could not clarify what the man was held for, or provide any details about the nature of the complaint.

“It is still under investigation, and it would be inappropriate at this point to comment any further until the investigation is concluded and charges are laid, or not laid,” said Major.

“Immediately after the complaint was made, the member was removed from the training centre, and they’re not going to participating with cadet activities or have any contact with cadets pending the outcome of further investigation.”

Major stated that all members of the Canadian Forces are held to a high standard of conduct and performance, on or off duty.

“Harmful and inappropriate behavior of any kind is unacceptable, and undermines the fundamental trust and cohesion that is at the heart of (the) Canadian Armed Forces ethos,” said Major.

“Pending the outcome of the investigation, we will do an administrative review, and that will be initiated to determine the most appropriate career or disciplinary action, as well as the member’s suitability for continued service.”

The military police investigation is ongoing, and Major indicated investigators will making recommendations which could result in an administrative review, disciplinary review, or the turnover of the case to the RCMP.

She did not speculate as to how long that process will take.