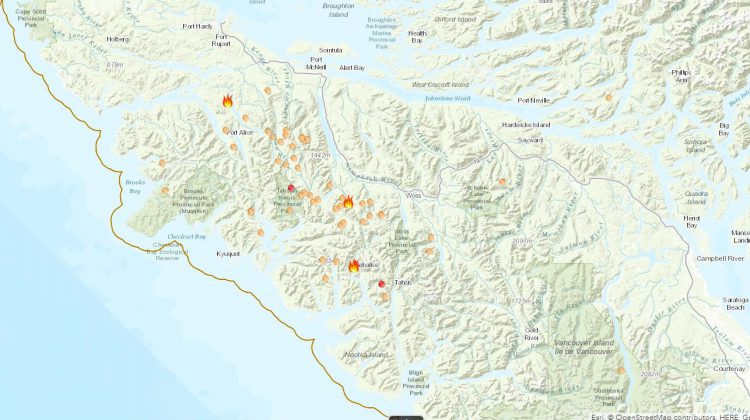 NORTH ISLAND, B.C – 65 fires continue to burn on the North Island, over 200 crews have been deployed to fight them.

According to Lynn Wheeler, media spokesperson for the Coastal Fire Service, high winds may cause problems today, and hydro lines are a major issue for a number of the blazes.

“We are expecting winds up to 50 km an hour, which will increase fire activity,” she said.

Of the 65 burning, 16 of them have firefighters working on them, and four are “of note.”

According to an update from the Zeballos Emergency Program Operations Center, the Gold Valley Main Fire, is currently 168 hectares in size. Structural protection crews are on scene, and Coastal is deploying a RAP attack team to assess the blaze.

Wheeler said the “fire is 1000 feet away from a hydro line”, and crews are focusing efforts on making sure the fire doesn’t damage the line.

At Pinder Creek, along the service road to Zeballos, a fire burns at 220 hectares. 14 firefighters and three helicopters are on scene. Wheeler said the “big priority is keeping the road open and hydro lines clear.”

That fire is 20% contained. Fire crews are working closely with fallers and B.C Hydro, intermittent road closures are in effect.

Epinose Creek, near the Oclucje Reserve, is now 50 hectares in size. 15 firefighters and one helicopter are on the scene, as well as a dozer building fire guards.

Larry Lake, near Port Alice is currently burning ten hectares in size, Wheeler said the “significant winds” may cause problems for crews today.

“While we can safely fly today and bucket, if the winds get too aggressive we will have to pull crews,” she said.

“We will fight the fire as we can.”