Smoke clearing from the coast as weather patterns shift 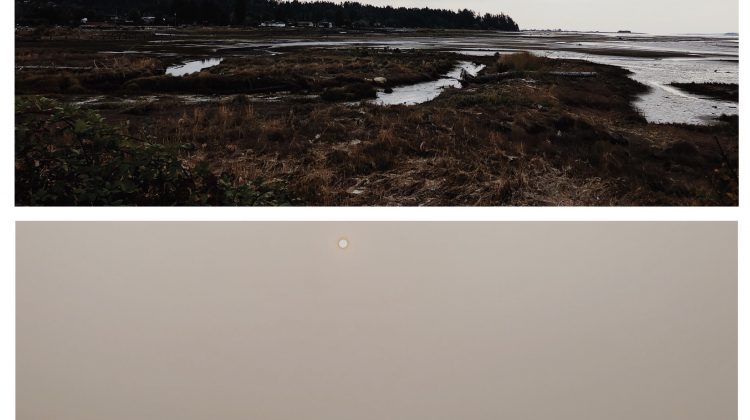 The scene off the shoreline of the Courtenay Airpark in the Comox Valley is pictured on August 23rd and August 20th, showing the impact of wildfire smoke. Photo by James Wood/98.9 The Goat/Vista Radio

VANCOUVER ISLAND, B.C- The smoke on the West Coast has receded today.

For the last week, smoke from wildfires burning across British Columbia had been blanketing communities on Vancouver Island and the Sunshine Coast, with multiple air quality advisories issued from Environment Canada.

The smoke had been expected to stay around until the middle of the week, when a “big change” in the weather patterns had been expected. That change has now arrived, with air from the Pacific Ocean coming in across the coast and pushing smoke out of many affected communities.

According to Gregg Walters, a meteorologist with Environment Canada, air quality reporting stations across the east coast of Vancouver Island down to Victoria have been reporting improvement as smoke dissipated, “to a large degree”.

“The next few days, we’re looking at a northwest flow across Vancouver Island,” said Walters.

“That should probably result in the smoke not developing as strongly as it did a few days ago, but there is still going to the fire activity in northern Vancouver Island.”

Smoke from those northern fires could drift down-island in the next four to five days.

“It doesn’t look like there is going to be an awful lot of rain associated with this change in the weather pattern, but it should result in conditions being a little bit cooler,” said Gregg.

“With the wind shift, the smoke doesn’t seem to be as big of an issue.”