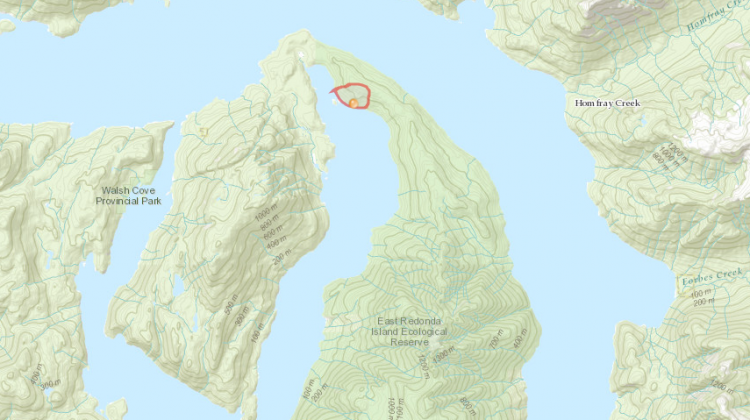 A wildfire on the East Redonda Island ecological reserve has grown to 110 hectares. Courtesy BC Wildfire Service
EAST REDONDA ISLAND, B.C. – A wildfire burning on an ecological reserve on East Redonda Island has more than doubled in size over the past two days.
The fire has grown from 45 hectares to 110 hectares and continues to be a  “modified response fire,” meaning the land manager – in this case BC Parks – has a management objective of allowing the fire to burn, rather than to allow fire suppression activities which could damage the area’s ecosystem.
“It’s an ecological reserve, and BC Parks and the BC Wildfire Serve have discussed the management objectives in that ecological reserve,” BC Wildfire information officer Dorothy Jakobsen explained.
“My understanding is, we would need access in the area, so that would give other people would need access afterwards and it would be damaging to the ecosystem, as well as bringing in heavy equipment would be damaging to the ecosystem, and possibly the use of retardants or anything like that,” she said.
“And it is healthy in ecosystems to have them rejuvenated by fire from time to time,” she added.
On Thursday, five firefighters and a helicopter were deployed to work on the wildfire.
The firefighters are re-enforcing the control line and laying sprinklers down.
The fire started Aug. 24. It’s suspected that it may have been human caused, but is still under investigation.
East Redonda Island is located on the west side of Homfray Channel, north of Desolation Sound Marine Park.
Ecological reserves are areas in B.C. selected to preserve representative and special natural ecosystems, plant and animal species, features, and phenomena.