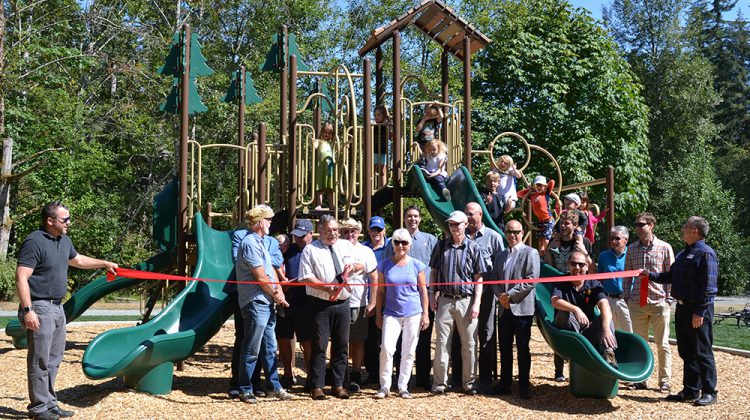 A city-supplied photo of the ribbon-cutting.

The new playground was first installed back in July, with a location change over to the other side of the field where the old playground was located, next to the Puntledge River.

A ribbon cutting was held this afternoon with the City of Courtenay, and the Rotary Club of Strathcona Sunrise.

The park has a slide pole, rock wall, space walk, climbers, overhead ladder, and a wave slide. A new set of swings was put in as well, with a “parent and tot” combination swing. New benches and picnic tables were also installed, with native plants added to the garden area next to the playground.

“Funds received by our club from B.C. Gaming and community support of our local events such as Have A Heart Dinner Theatre and Comox Valley Ribfest have made our donation possible.”

“Puntledge Park is one of our city’s most popular places for locals and visitors alike, and there are lots of kids in the surrounding neighbourhood, so we know this playground will be well-used,” said Jangula.

“We’re grateful to the Strathcona Sunrise Rotary Club for their contribution, which has helped make this park an even better destination for families.”

The bridge leading in to the park from the main parking area is also planned to replaced by the City of Courtenay in future.