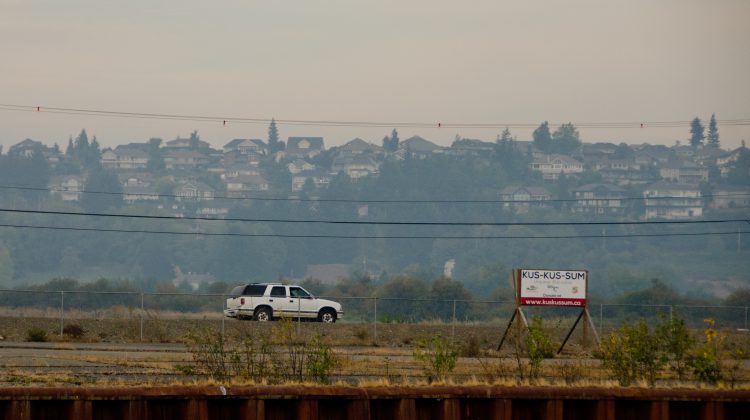 Houses in east Courtenay are obscured by wildfire smoke during the early evening on September 5th, 2018. Photo by James Wood/98.9 The Goat/Vista Radio

COMOX, B.C- A haze of wildfire smoke drifting into the Comox Valley is believed to be coming from the east.

The smoke drifted into the area both Tuesday and Wednesday afternoon, limiting visibility across the valley and bringing a strong smell of wildfire smoke throughout the communities in the area.

According to the Comox fire department, the haze is due to an afternoon shift of wind patterns that carry wildfire smoke from the blaze on East Redonda Island to Vancouver Island.

The fire burning on an ecological reserve has now grown to more than 200 hectares.

It continues to be a “modified response fire,” meaning the land manager – in this case BC Parks – has a management objective of allowing the fire to burn, rather than to allow fire suppression activities which could damage the area’s ecosystem.

Expected rain over the weekend is expected to help the wildfire fight.

Wildfire smoke is expected to clear overnight and drift back in around the same time on Thursday.