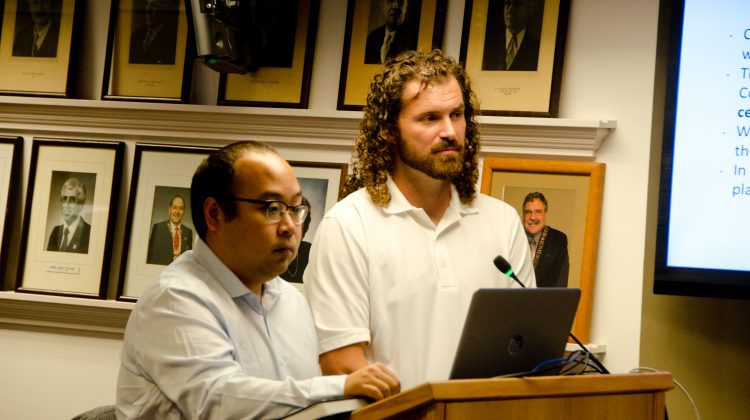 COURTENAY, B.C- The two men behind an ambitious marijuana project had a less than positive reception at Courtenay city hall on Tuesday.

Earlier in the summer, the company announced their plans to create a marijuana grow operation on land along Fraser Road. The announcement caught the municipal government by surprise, with mayor Larry Jangula expressing anger about the company’s actions.

Park and his business partner Dylan Hardie have partnered with Alberta-based Atlas Growers, with a announcement earlier in the summer about their intentions to build a 100,000 square foot facility over five acres of land.

The decision to locate in the Valley is the result of Atlas acquiring Coastline, the pair’s company, which had secured the Courtenay location.

A press release from Atlas stated that the land has been leased for 20 years, with construction planned to start within the next two months depending on financing.

The estimated production capacity is described as 42,000 kilograms, with the cannabis from the Courtenay site being intended for adult use in the recreational market.

Since the initial announcement by the company, efforts have been made by the company to consult with the local residents of Fraser Road and the municipal authourities, which resulted in the presentation on Tuesday.

Both Park and Hardie spoke about their company’s goals at length, which included details about their application with Health Canada. According to the pair, they’re looking to put together a 40,000 to 60,000 square foot facility, with the application currently at 42,000 square feet. They also stated that Atlas has applied for a cultivation and sale license under Health Canada’s medical cannabis regulations, with Coastline undergoing the same process.

They were followed by Cheryl Glennie, a resident opposed to the project. Glennie expressed her concerns about the company’s plan, citing her fears about light pollution increasing, traffic increasing, the smell from the marijuana operation, and the impact of bunker-style farming on ALR land, among others.

Glennie said none of the neighbours in the area are “for” the project, and did not believe what the company was saying about their project.

The response from council was muted, with Mayor Larry Jangula expressing multiple concerns about the project and questioning the men about their proposal.

He later said that he hopes council “fights” the plan, given concerns from the neighbourhood.

After the meeting, Jangula re-iterated his opposition to the project, based off his concerns about what impact it might have for the residents along Fraser Road.

“I think a really good point is that when you buy property next to an agriculturally zoned piece of property, you may assume you’ll smell agricultural smells, but you don’t necessarily assume you’re going to smell marijuana production smells, which are a lot stronger, and more annoying, and more difficult,” said Jangula.

Jangula indicated that Coastline will need to approach council for approval if they plan on making any use of the land beyond what agricultural regulations allow, such as the construction of “bunker” style growing facilities.

He also said that he challenged the rest of city council to oppose that current set-up, though a motion was not made to that effect during the meeting.

“Why don’t we join the bandwagon of a whole bunch of other communities who are saying we don’t care what the province is saying, we don’t want this in our area?” said Jangula.

He also believed the project could be moved to other agriculturally zoned land on the Island.

“That’s the suggestion I made to these people right from the beginning,” said Jangula.

“Why don’t you go somewhere and set up your facility, which we understand is legal and allowable, and that’s fine, but where it doesn’t have that kind of a possible negative effect on residences?”

As for whether or not Jangula was concerned about potentially scaring off other marijuana companies from investing in the Valley, the mayor said he wasn’t worried.

“There are too many uncertainties in all of this industry right now,” said Jangula.

“Nobody understands any of the rules, or perimeters, or the effects, or what may happen in the future. We’re not opposed to any new industry but is has to comply with the neighbourhood that it goes into. That’s all we’re saying. I think that’s realistic.”

As for how the pair plan to move forward with their plans, Hardie was determined to see them through, and wasn’t surprised by the mayor’s thoughts for their business proposal.

“I don’t really have a strong reaction to him on that,” said Hardie.

“We’ve had very positive feedback from all the councillors we’ve talked to, so I don’t really have a strong reaction, if that makes sense.”

Hardie said they’re still in the process of raising funds and developing the idea, as well as getting studies done. The exact form of the facility has not yet been decided.

“We still have to find out if we can do an indoor construction, before we can apply to build one,” said Hardie.

“If we do a greenhouse, we don’t have to apply for one (a municipal permit). We could start doing the greenhouse stuff right now. We still have to get water, and sewer, and that’s going to be with the city regardless. We’re just trying to take our time to do this right, we want to make sure we’re not rushing headlong into something.”

City staff have said a building permit would be needed for a greenhouse on the land.

There is no firm timeline on when construction will begin.

EDITOR’S NOTE: This story has been updated with more information from the City of Courtenay.