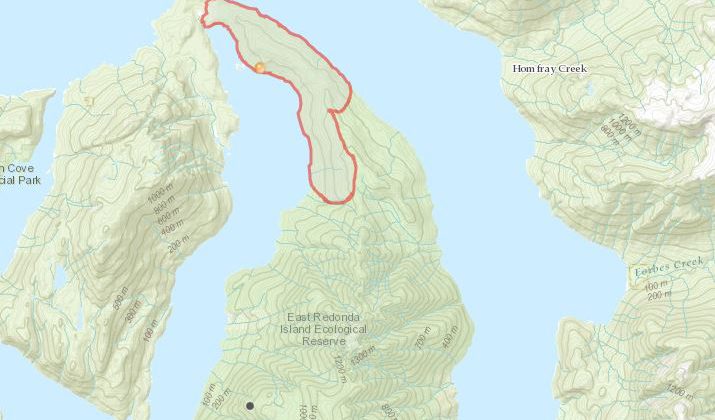 The wildfire on an ecological reserve on East Redonda Island has grown to 607 hectares and is burning out of control.

EAST REDONDA ISLAND, B.C. – A wildfire burning on an ecological reserve on East Redonda Islanda has spread and is now 670 hectares, burning out of control.

The fire is still a  “modified response fire,” meaning the land manager – in this case BC Parks – has a management objective of allowing the fire to burn, rather than to allow fire suppression activities which could damage the area’s ecosystem.

While no new information on the fire was available late Monday morning, BC Wildfire information officer Dorothy Jakobsen said, “We certainly suspect and hope that the wet weekend has decreased fire activity there.”

She added, “We need to get eyes on it this week, so we’ll be flying (over) it this week to see what the situation is, there.”

There are no crews assigned to the fire, however a control line has been established, so the flames have not made their way out of the ecological reserve.

“The sprinklers are there, the control line is there,” Jakobsen said.

If the wildfire breaches the ecological area, BC Wildfire will revisit its strategy.

“We would be talking about different suppression activities,” Jakobsen said.

The fire started Aug. 24. It’s suspected that it may have been human caused, but is still under investigation