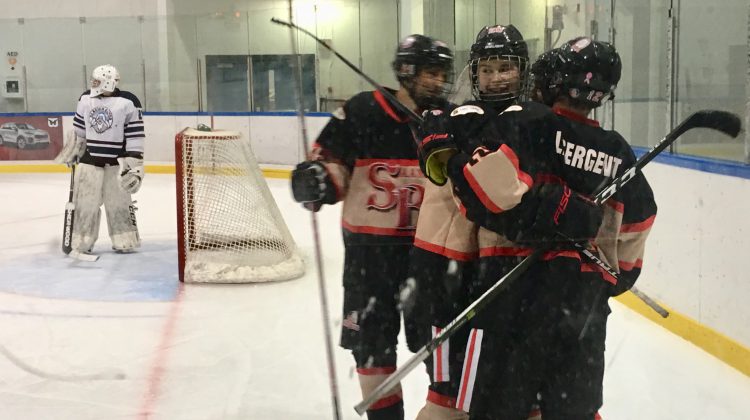 COURTENAY, B.C. – Home cooking tasted more than a little off for the Comox Valley Glacier Kings over the weekend.

The Braves turned a 1-0 lead after the first period into a 6-0 blowout after 40 minutes of play.

The Glacier Kings held the visitors to one goal in the final frame to close out the night.

“Honestly, I wasn’t too upset about Saturday,” Kamprath said. “The score didn’t reflect how I think the players were on the ice with the mentality and hard work they put in.”

That youth showed on Saturday, according to Kamprath.

“The systems aren’t there, but the back-checking, the hard work is there,” Kamprath said. “I think it was five or six wide open nets that we didn’t capitalize on and as the season goes on, those players will bear down on their sticks a little bit better and put them into the back of the net, and it’s a totally different ball game.”

A key moment came on fresh ice to start the second period, as a Glacier Kings defenceman lost an edge and fell backwards, allowing Saanich’s Gavin Grewal to move in alone on a breakaway. Grewal’s first shot was stopped by Comox Valley netminder Braedyn Funke , but Grewal stayed on the puck to bury the rebound, making it 2-0 just 15 seconds into the middle frame.

“One-nothing game and everybody’s amped up, we’re into the game, we’re outhitting them, we’re getting shots on net and then all of a sudden he (the defenceman) catches an edge, he goes down and breakaway, boom, the guy gets his own rebounds and scores on it, right?” Kamprath said.

The visitors poured it on from there, tallying four more times before the period was through.

Kamprath said the players never gave up, even when they were down seven with no hope of coming back.

“We back-checked all game long,” Kamprath said. “We were losing 7-0 and we were still back-checking during the game. We had 10 minutes of a breakdown and they scored five goals. Take away those five goals and it was a very, very close game. There are lots of positives to take out of the weekend.”

Grewal led the way with a hat trick for Saanich, which improved to 2-0 with the win.

The Glacier Kings dropped to 0-2 and will be looking for their first win of the campaign Friday, when they visit Campbell River to take on the rival Storm.