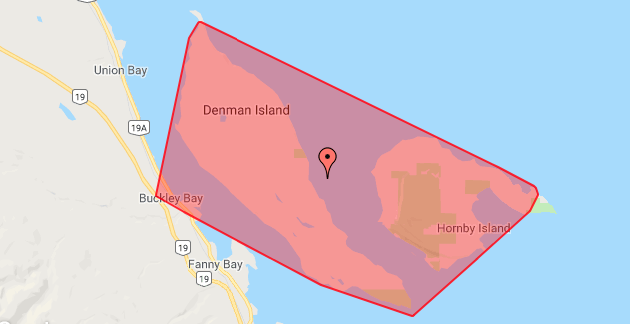 A Google Maps view of the affected area.

DENMAN ISLAND, B.C. – Crews are currently on scene after a power outage was reported, affecting both Hornby and Denman islands.

The loss of power was first noted at around 9:45 a.m. According to BC Hydro, over 2000 are affected by the outage.

A wire was knocked down north of Deep Bay Road. Crews are currently on-site working to restore power.

Meanwhile, another outage was listed in Comox, along the 1300 block of Military Row. Hydro noted that less than five properties have been affected.

Crews have been assigned to the area. Power has been off since 9:36 a.m. The cause of that outage is not known as of this publication.