Bear sighting at Courtenay park not out of ordinary, says CO 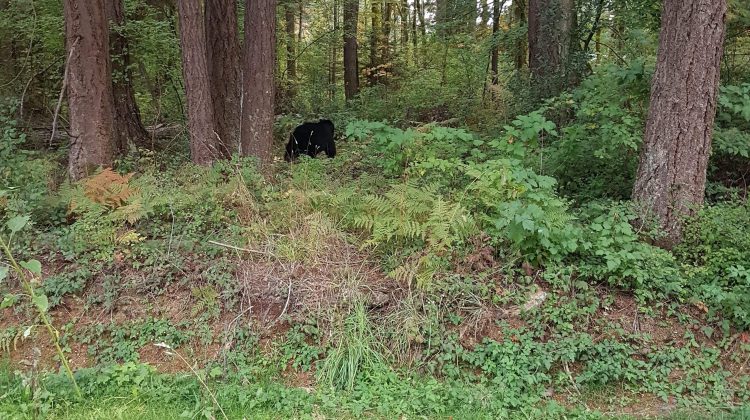 COURTENAY, B.C. – A black bear sighting at Capes Park at around 7:30 Wednesday night is not uncommon for this time of the year, said North Island Conservation Officer James Hilgemann.

Capes Park is a roughly five-minute drive from downtown Courtenay,

“It’s all part of their life cycle,” he said. “Bears were here first so we just kind of shown up and developed our towns. We live amongst them. These encounters aren’t unusual.”

Hilgemann said there have been roughly 20 bear sightings around Courtenay over the past couple of weeks.

That number is “way down” from previous years, he noted: “We’ve had an excellent bear season this year.”

“I think people are starting to take more responsibility for their attractant management, (such as) keeping their garbage secure and out of the reach of animals,” he said.

Many of the sightings have been along the Puntledge River, which Hilgemann noted isn’t surprising considering the number of salmon in the river this time of the year.

“All those little tributaries are going to have salmon and they’re usually accessible for bears,” he added.

He added that fruit such as apples and bears coming into season are attracting hungry bruins.

“That’s the next crop they’re interested in,” he said. “If you haven’t picked your fruit there’s going to be bears in your neighbourhood.”

By December, most of the local bears will disappear into hibernation.

“There might be the odd bear that hasn’t hibernated like it should because it hasn’t got enough body weight,” Hilgemann said.

“So they might get up and be aroused by some water in the den, or just enough body fat to carry them through. So they’ll get up and graze on grasses and what have you, or the odd salmon that’s laying on the riverbed. But usually they disappear for, I’d say, about four months where you don’t see any bears.”

If you do encounter a bear, Hilgemann said to stay calm avoid the temptation of running away.

“Your thinking cap is the most valuable thing to use,” Hilgemann said. “A big rule of thumb is not to turn and run away. That’s probably your first instinctive thing to do, but you don’t want to do that. The bear might give chase, you know, predator/prey relationship.”

Hilgemann advises to identify yourself as a human being, talk to the bear, back up slowly, and try not to make eye contact as that can be seen as a sign of aggression.

Also, give the bear an escape route as a cornered animal is a dangerous animal.

And also, if you see a bear scat still steaming or a half-eaten salmon, it’s not your day to go for a hike.

“Come back another day,” Hilgemann said.

If you see a bear acting aggressively or unusually, call the Conservation Officer Service at 1-877-952-7277.