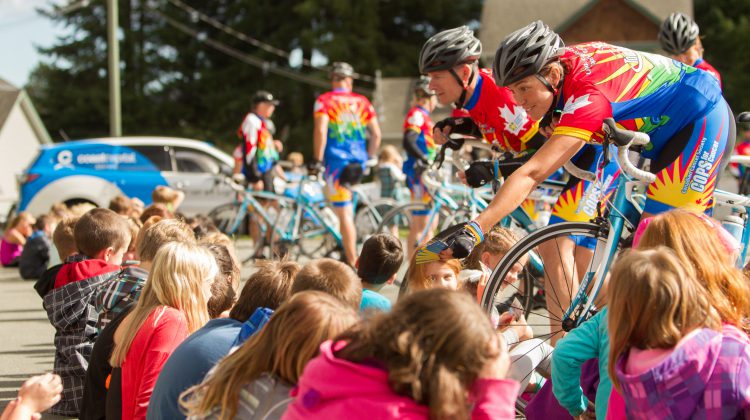 VANCOUVER ISLAND, B.C. – A convoy of 22 cyclists are traversing the roads of Northern Vancouver Island this week.

These are no ordinary cyclists.

The Tour de Rock team is made up of law enforcement personnel, emergency responders and citizens who cover 1,000 kilometres of asphalt over two weeks in support of children who are fighting cancer.

To date, Tour de Rock has raised more than $24 million for pediatric cancer research and support programs, and has spawned three other similar Cops for Cancer rides elsewhere in B.C.

A good portion of the funds raised goes to send kids to Camp Goodtimes, a special camp for kids with cancer.

“They can have fun and they’re with kids who have gone through it (cancer treatments) all before and they understand. It’s just a very magical place.”

Through funds raised by the ride, roughly 470 kids are sent to Camp Goodtimes every year.

Tour de Rock arrives in Campbell River today and will be in the Comox Valley tomorrow before heading south to Cumberland, Qualicum and Parksville on Thursday.

The group started their journey Saturday when they made their way up to Port Alice.

Last year, Tour de Rock raised $1.3 million for the cause.

The goal this year is to “do that or better,” according to Buehler.

She added, “Every penny counts, so whatever we raise will help the kids and that’s the nice thing about it.”

Tour de Rock is an emotional journey for the riders, who are paired with kids battling cancer.

“They get to know the families and they get to know what is going on with the families, what their journey has been like and really understand who they’re raising money for, and the devastating effects that cancer can have on an entire family,” Buehler said.

Along the way, plenty of people who either have cancer or have been touched by the disease in some way come out in support.

“You really walk away with an understanding that cancer affects everyone and we have to do something about it,”  Buehler said.