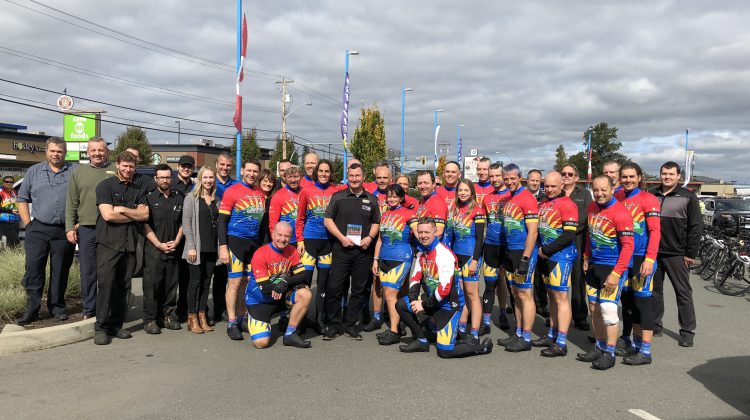 The Tour de Rock team at the Tyee Chevrolet Buick dealership in Campbell River, BC. Photo by Twila Amato/Vista Radio

The team stopped off at the Tyee Chevrolet Buick dealership earlier in the day.

“We started off up in the north in Port Alice and the communities might be small, but they have huge hearts. Sayward, being the little village that it is, raised 15, 000$ and that is phenomenal,” said Emery.

“I know how important the research and the treatment is, and finding gentler forms and I didn’t get a chance to go to Camp Goodtimes but we were able to visit Camp Goodtimes this summer and it’s a phenomenal place.”

Later in the day, the team of 22 cyclists will be off to the Campbell River Common Shopping Centre for a big welcome. There will be bouncy castles for the kids, as well as head shaving as part of the fundraising campaign.

Tomorrow, they will visit Ocean Grove Elementary and then head down to the Comox Valley for the rest of their tour.

Cyclists participating in Tour de Rock are a mix of law enforcement personnel, emergency responders and citizens. They cycle 1, 000 kilometres over two weeks to raise funds for children battling cancer.

The money raised goes towards cancer research, as well as Camp Goodtimes, a special camp for kids with cancer.