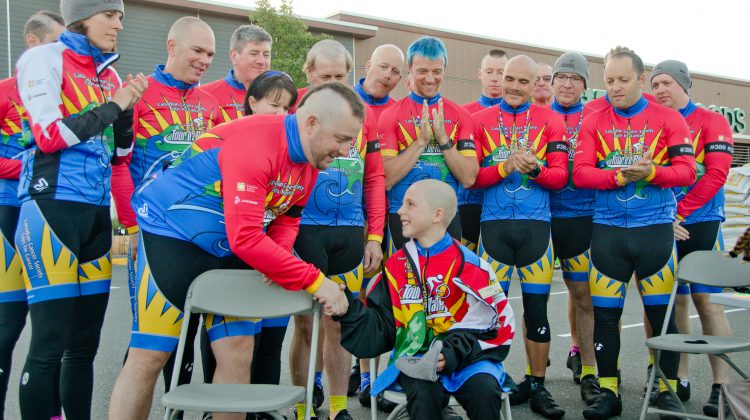 Braelyn Terragni, a young Valley resident, receives a toque from riders after she got her head shaved during the Tour De Rock stop at the Thrifty Foods in eastern Courtenay on September 27th, 2018. Photo by James Wood/98.9 The Goat/Vista Radio

The tour is made up of 22 cyclists riding along the shores of Eastern Vancouver Island to raise funds for kids with cancer.

The team members are made of mostly of RCMP officers and emergency responders, who share a common goal of sending kids to Camp Goodtimes, which offers a summer camp experience for children and teens battling cancer, and their families.

Over two weeks, the Tour de Rock team cycles from one end of the Vancouver Island to the other, covering 1,000 kilometres and visiting more than 27 communities along the way.

After their arrival in the Comox Valley yesterday morning, the team visited multiple schools and community organizations, ending the evening with the Red Serge Spaghetti Dinner in Comox.

Rider Andy Quinn is getting used to the double takes, whenever he pulls his bicycle helmet off his noggin.

The Courtenay firefighter and Tour de Rock cyclist has been sporting a ‘monk cut’ where the top of his head was shaved and the rest of his locks were left unshorn.

He sacrificed his hair in a most unique way as a sign of camaraderie with his Tour de Rock teammates as they pedaled south along eastern Vancouver Island to raise funds for kids with cancer.

“It’s become a tradition over the first couple of nights where we think about what our personalities are,” Quinn said. “In my case I’d already had somebody offer me a significant amount of money if I would do a ‘monk cut.’ I threw a number out and he went for the bait.”

All of the money went to the cause. Through the haircut alone, Quinn raised enough money to pay one-third of a fee for a child with cancer to go to Camp Goodtimes, which offers a summer camp experience for kids with cancer and their families.

“I’m hoping to make more than enough with my mustache tomorrow morning to send a kid to Camp Goodtimes,” Quinn told MyComoxValleyNow.com, during Wednesday’s night’s spaghetti dinner in Comox.

“The gang is kind of devious. There’s rumours it might only be half shaved, and take a couple days to get the job done but it’s for the kids. I’m enjoying the challenge of the ridicule.”

Quinn said the roughly 1,000-kilometre bike ride over two weeks is about challenging the team members.

“For us, we’re on our bikes for a while, and we can stop and we can rest and we’re not dealing with cancer anymore, we’re just done for that time,” Quinn said. “Whereas a kid with cancer is 24/7. It’s what kind of drives us. Getting up a hill is a big, personal conquer, but you are at the top. You’re thinking, ‘Wow, I did that and it feels great, but it really is just a molehill (compared) to what the kids are dealing with.”

Other than his dad bouncing back from his bout with skin cancer, Quinn said he’s lucky in a sense in that he’s been “very unscathed by cancer with family.”

He also feels fortunate to be paired with an inspirational junior rider.

“He has actually just come to his five years of remission, which is a really big deal,” Quinn said.

“He’s feeling pretty happy about that and so am I, obviously.”

Junior riders – kids who are either battling cancer or are in remission – are “almost like life coaches for us,” Quinn said.

“Just hanging around with these survivors teaches you a lot about the human spirit and how, with the right mindset and the right love and affection from everyone, plus a bit of medical intervention obviously, there really are miracles happening every day.”

This morning, the team had breakfast at the Thrifty’s Foods parking lot in eastern Courtenay, with food cooked by the grocery store staff. 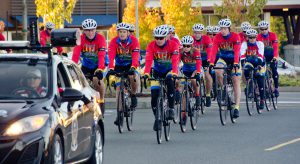 The team arrives in the parking lot for the Thrifty Foods in eastern Courtenay on September 27th, 2018. Photo by James Wood/98.9 The Goat/Vista Radio

During the stop, two Valley residents donated their own hair for children who lost theirs through cancer treatment. Braelyn Terragni, a young girl, had her whole head shaved.

“There are some people that take medicine that kills their cancer, but they lose all their hair, and they won’t get their hair back,” said Terragni, when asked about why she did it.

She had raised $1500 to donate, according to her mother Monika, and wants to join the ride in future. After the shave was finished, she received a toque from the riders.

Quinn also received another $1500 donation from a local friend, after getting another hair cut and mustache trim. 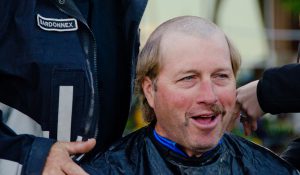 Courtenay firefighter Andy Quinn gets his head and mustache trimmed during the Tour De Rock stop at the Thrifty Foods in eastern Courtenay on September 27th, 2018. Photo by James Wood/98.9 The Goat/Vista Radio

One of the riders from the Valley, local broadcaster Jon De Roo, said that the support for participants was overwhelming.

“They think the world of us, but really, I’m just a guy on a bike,” said De Roo.

He said it was “extra special” to show off what he believed was the best part of Vancouver Island to the other riders, and touched on some of the challenges the ride has posed.

“I drank a funky water bottle, and that almost killed me,” said De Roo.

“The emotional rollercoaster, I would say, would be the biggest challenge. You’re getting waves, with all of these screaming, awesome kids, they’re all super fun and the like, and then you can also get some bad news at times as well, and that can be really, really hard.”

The ride will be ending their leg today in Parksville.