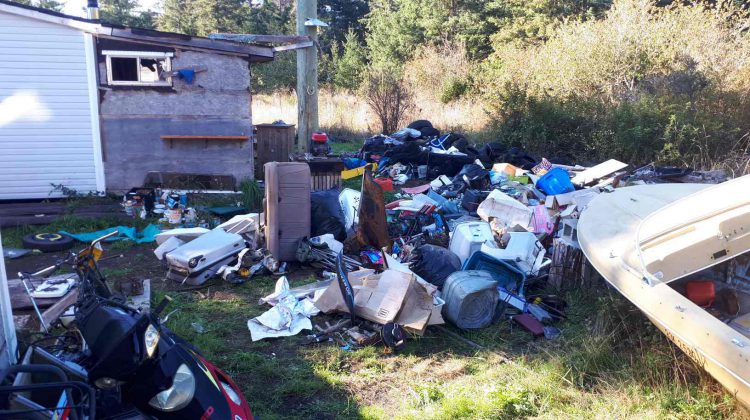 Trash is seen outside the residence in a photo supplied by KFN.

According to a news release from K’ómoks First Nation (KFN), the case in question involved private criminal charges against a couple who had been trespassing on KFN lands, which were pursued under the nation’s land code.

The news release stated that that the couple had had their lease terminated last December, and remained in their home from that time until October 2nd, 2018. They had been asked to leave, and had a letter of trespass issued by Chief Nicole Rempel.

“They made no payments to the owner of the home in those 11 months and have done extensive damage to the home as well as the property, which is owned by the Nation,” read the release.

“They flat out refused to leave. We contacted the RCMP numerous times. We had meetings at a Chief and Council level with the RCMP, and they refused to uphold the law, because the land code wasn’t a law they were familiar with.”

With the case decided by the court’s in KFN’s favour, the nation’s rights to manage their own lands and have their laws enforced and upheld has been confirmed.

“I’m extremely happy that the provincial court decided that this was something we could uphold,” Rempel said, in the release.

“Hopefully, we don’t have to go through the court again. Hopefully, the relevant authorities recognize the law and uphold it the way they’re supposed to. This verdict is a great advancement in recognition of first nations laws and a win in our advancement in self-government.”

Reached for more comment by the MyComoxValleyNow.com newsroom, Rempel indicated that KFN will reach out to the local RCMP to do more education on the nation’s land code.

“Hopefully, with the new inspector coming in, he may have already started, we’ve had one meeting with him,” said Rempel.

The KFN lawyer has been reaching out to the Crown, and Rempel expected a Chief and Council meeting with the new RCMP Inspector in the near future.

She was also aware that the evicted couple had been looking for a new place to stay in the Valley, but didn’t know where they had ended up. The next step for KFN, according to Rempel, is the establishment of a tenancy act, due to the province’s legislation not applying on their lands.

The land code itself is the result of the First Nations Land Management Act enacted in 1999, which gave First Nations the authority to write their own laws for managing land and resources.

A request for comment has been sent to the Comox Valley RCMP.