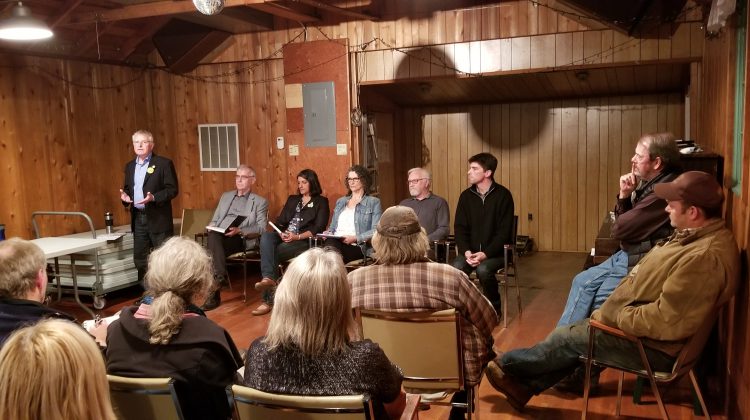 Edwin Grieve (standing) answers a question during the CVRD all candidates forum on October 16, 2018. Photo by Justin Goulet/98.9 The Goat/Vista Radio

All candidates were in attendance, except for Electoral Area C candidate Jay Oddleifson, who was unable to attend.

Candidates at the venue included:

Farming was in focus, with the hall filled with local members of the agricultural community. One of the topics brought up was the Comox Valley agriplex, a multi-use super-centre proposed for the Exhibition Grounds.

The agriplex would be an indoor venue for events like the RCMP Musical Ride, and out of town shows like dirt bike exhibitions.

It’s been in talks for over the last four years.

“I have a lot of questions about it,” said Area A candidate Daniel Arbour.

“Are there (better) places for the ALR (Agricultural Land Reserve) to locate it? What would the level of community support be (like) for it?”

“I would support the agriplex but certainly need more information for a project that size seeing as it’s gonna be located on ALR land. Until I get some more information I really don’t have a strong opinion one way or another,” said fellow Area A candidate Jim Elliott.

Jay Oddleifson could not attend the forum, but prepared his answers to the pre-submitted questions beforehand.

His wife appeared on his behalf to read out his responses.

“The agriplex should make sense to the agricultural community first and foremost, and serve as a venue for celebrating and facilitating our rural lifestyles, rural economic development and rural co-existence of the land” he stated.

“Comox Valley Exhibition Society and Farmers Institute have come a ways in refining the concept (of the agriplex). I think more work can be done so that this concept can meet the needs of additional user groups, with the main one being the Comox Valley Farmers’ Market as presumably they would be a an (active) tenant.”

Arzeena Hamir, running to serve Electoral Area B, started her statement by saying she “stands out with a big no”.

“In principle (though), I think it is a project that we need. Farmers in the Valley need a place to aggregate their products, and value add so that we can ship it all over the province and export it. The Comox Valley Farmers’ Market needs a permanent home,” she said.

“There needs to be some more inside area for agriculture … I did a back of the napkin calculation because it sounds like there’s now two buildings being developed, one with a door floor and one with cement.”

She went on to flesh out examples of events that would use a venue like this.

“If the RCMP Musical Ride can fit on the dirt side, I’m estimating it’s now over 100,000 square feet. That’s just over two acres of covered area on ALR land.”

“I don’t see a lot of benefit to ag (agriculture) for an agriplex, which if it is going to be that big, my estimation is that it’s gonna cost between 30 to 50 million dollars.”

She went on to say that there are portions of the project she agrees with, but plans could be implemented elsewhere in the Comox Valley.

Area B candidate Rod Nichol voiced his support for the agriplex idea.

“The whole Comox Valley could no doubt benefit by this. The agricultural community would be the prime tenant of this big building,” he said.

“I’m in support of the idea and principle. It’s not gonna happen tomorrow … a lot of discussion will happen, but it would be nothing but a benefit to this valley.”

“Nobody’s farming the Exhibition Grounds … You look no further than Abbotsford, Chilliwack or even Duncan to see that you can have these types of facilities on agricultural land,” he stated.

“I think you scare people when you talk about a big building, but how else can you have livestock shows, jumping, barrel racing and all that stuff in an indoor except to have a very large building.”

Both Grieve and Nichol said if this agriplex were to be built, user groups would be able to cover operating costs in a major way.

“I think for people to say it’s too grandiose, I would say that would be the same thing they told my grandfather and my uncle who built the Native Sons Hall,” said Grieve.

Land clearing with controlled burns, and air quality were also brought up multiple times throughout the two-hour forum.

“Agriculture is the number one dollar machine in the Comox Valley,” Grieve told the audience.

In regards to people clearing their land through burning, he said that, “what I’ve seen lately are people behaving badly. The cost of having a stump grinder come in and do the work, my understanding is that it could cost a thousand dollars an hour or more, up to ten-thousand dollars an acre. Those machines also use a lot of fuel, so you’re basically trading off here.”

He said the only solution he sees is “doing it (land clearing) properly, doing it right and doing it once.”

Rod Nichol mentioned that he’s been witness to some people burning garbage in their woods stoves, which he referred to as “rancid”.

He said burning in more residential properties should be looked at more seriously, but on farmland, he could not see a way to stop farmers from clearing their land.

“The number one issue that has come up (when door-knocking) has been air quality,” said Hamir.

“People are having a hard time through the fall and winter when wood smoke starts becoming the main heating source, but I don’t want to (compare) that with clearing of land. As a farmer, I hate seeing organic matter burn up in the air.”

Hamir suggested purchasing equipment that would help farmers grind their materials, in order to stop it from creating smoke in the air.

“I do still see a lot of leaf burning (too) and that doesn’t make sense at all. I think we need to encourage farmers to be the recipients of organic matter. Farms should be paid to get some of that organic matter back from the areas that can’t use it. Instead of burning it, we should be working with our more urban neighbours to (exchange) some of that material so it’s not burnt up in the air.”

Oddleifson stated that farmers are “primary users of our land”, and the Comox Valley is a “predominantly farming area.”

“While air quality is clearly an important issue, I do not feel that open agricultural burning requires more regulations,” he said, via his wife.

“If burning is essential, farmers need to ensure that it is completed in a way to minimize environmental impacts, and the impacts on neighbours.”

Elliott said he didn’t think more regulations for agricultural burns were needed, as most of the farmers in the region are responsible.

“I certainly like the suggestion of grinding the material … You know, grind it up and compost it, that’s probably the best use for it, but the cost would be (an issue) for most farmers to go down that road.”

Arbour joked with the audience, saying he’d “like to see more burning”, to which Elliott responded, “that’s tomorrow”, referring to the legalization of cannabis, which elicited laughs from the audience.

“I like the idea of a pilot (project), you know to look at ways that we can manage the organics (materials on farmland),” said Arbour.

“The local knowledge is important. If some of the burning can occur in September to October, or May to June, in times where you’re not seeing as much residential smoke (from wood stoves, etc.), that might be something that the sector can look at.”

Voters head to the polls for the 2018 municipal election on Saturday, October 20th.