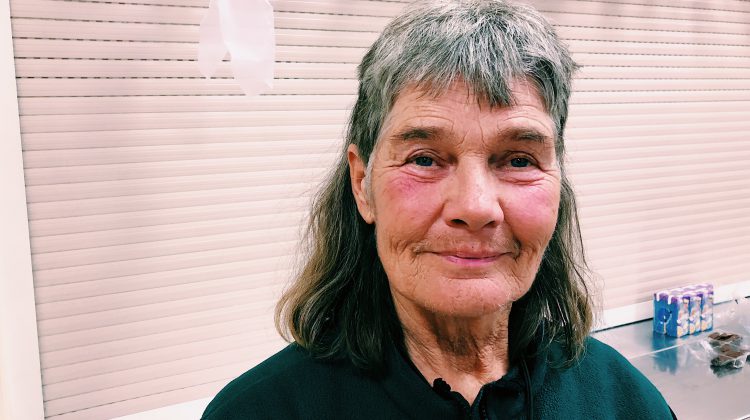 Courtenay senior Susan Holvenstot said she was 'shell shocked' after her electric bike was stolen early Monday evening near the Filberg Centre. Photo by James Wood/98.9 The Goat/Vista Radio

COURTENAY, B.C. – It only took a few seconds for Susan Holvenstot’s only mode of transportation to vanish.

The 68-year-old left her electric bike and iPad unattended for a moment near the Filberg Centre early Monday night, and a few seconds later, both were stolen.

“I lost both my transportation and my major communication,” Holvenstot said. “Both were stolen from me in front of the Florence Filberg Centre in that little park next to the river.”

Holvenstot had been waiting to go into a Comox Valley Cycling Coalition meeting at 7 p.m. and met up with a friend who happened to be walking through the area.

“She lives nearby so I just kind of walked with her and we were talking,” Holvenstot said.

They walked around the corner, out of sight of the bike.

“I hadn’t locked it because I wasn’t planning to be leaving it, I was just hanging out in the park for the next half hour,” Holvenstot said.

Her friend asked if her bike was still there.

Holvenstot glanced behind her and it was still in sight.

But when she returned moments later to get her bike, it was gone.

The black bike is a Jamis model equipped with an  eZee conversion kit. At the time it was stolen, the bike had red panniers (bags) attached to it.

Holvenstot doesn’t own a car and lives about four miles from downtown Courtenay.

“When I go into town, that (riding the bike) is how I get there and I do my shopping and everything,” she said.

Now she is hunting for her bike, with a plan of visiting local pawn shops and bicycle stores.

She has also started a file with the RCMP.

“I’m sort of shell shocked, trying to go through all the different steps,” Holvenstot said.

Later that evening, Holvenstot located her iPad through an app on a neighbour’s computer.

They drove to a homeless camp near downtown Courtenay.

“There were about a dozen tents in there,” Holvenstot said.

“It was midnight by this point. Some people were up by a fire and I went over and explained that I was looking for my bike and my iPad. We had a nice little chat and they said it wasn’t here. But it was dark and it was hard to see.”

She said she is returning to the camp and looking for the bike and iPad today. She also plans on making signs, advising people if they have the bike to return it to the Courtenay library.

If anybody knows the whereabouts of the bike, they can call the Comox Valley RCMP.