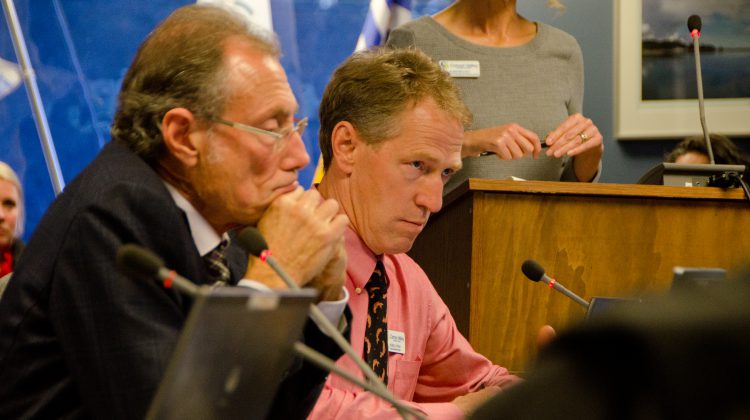 CVRD CAO Russell Dyson is pictured during the October 2nd, 2018 board meeting. Photo by James Wood/98.9 The Goat/Vista Radio

COURTENAY, B.C- The Comox Valley Regional District is heading back to court.

Last week, the district was served with a court action by 3L Developments Inc., which has filed a petition to the Supreme Court of British Columbia seeking nine court orders linked back to the denial of the company’s application for a new settlement node by the CVRD on October 2nd.

3L had been seeking a settlement node on lands near the Stotan Falls to allow for a housing development.

A change to a settlement node would switch the land’s designation within the growth plans of the district, to allow for more homes to be built than the current designation.

Prior to the denial, the CVRD had consistently disagreed with the company’s plans, which led to a court battle.

In their petition, the first order asked for is for the denial to be set aside.

Following orders ask for declarations that the CVRD had breached procedural fairness and natural justice through their handling of the process leading up to the denial, as well as what happened during the October 2nd meeting, while singling out the company’s views on opposition by Area C director Edwin Grieve, who was recently re-elected.

A human rights complaint by 3L project manager Kabel Atwall against Grieve is also mentioned in the filing, along with Grieve’s statement that caused the complaint and the settlement of the complaint by the district.

A summary of the court filing can be found here: https://www.mycomoxvalleynow.com/43525/3l-files-wide-ranging-court-action-seeking-overturn-of-settlement-node-denial/

The MyComoxValleyNow.com newsroom spoke with the CVRD’s chief administrative officer, Russell Dyson, about the filing and the CVRD’s plans to respond.

According to Dyson, the district received the petition on Thursday of last week, and have been reviewing the filing at a staff level with legal counsel. They are planning to advise the CVRD board of directors in the near future, though the current board is still composed of the members who were in place prior to Saturday’s municipal election.

Grieve is the only director returning to the board table, though he is unable to deal with any matters concerning 3L due to the settlement of Atwall’s complaint. New directors Daniel Arbour of Area A and Arzeena Hamir of Area B have not yet been sworn in, and directors from the Valley communities have yet to be appointed.

“The current board is the past board that’s been there for the last four years,” said Dyson.

“They are still in place, as our board, until the 20th of November when the inaugural meeting, that’s when the new board will be sworn in.”

As for whether or not the current board can make any binding decisions, Dyson stated they were the governing body for the district for the time being.

“We are mindful that a new board will be coming in and there are no scheduled meetings at this time,” said Dyson.

As for 3L’s views on their application being handled improperly, Dyson defended the district’s actions, stating that the process to review the company’s application was fair, reasonable, and transparent.

“You will recall that the board of directors decided that the application would be reviewed as a standard amendment, and then subsequent to that, they adopted the consultation and decision process, and the Regional District has followed through with that,” said Dyson.

He also said the district respected that applicants had opportunities to apply to the courts, with the CVRD respecting the court process.

“We’ll follow through by filing a counter claim to what has been received,” said Dyson.

Dyson did not comment on any of the points raised by 3L concerning Grieve or why the district settled the complaint, except to say that a possible breaking of confidentiality about the settlement by the company would be “a matter for the lawyers to consider”.

He also did not know how much a new court process would cost residents of the CVRD, saying that anything on the subject would be “very speculative”.

As for keeping residents of the area informed about the court process, which will be taking place in Vancouver, Dyson said the CVRD will be providing statements “as this goes on”.

“The regional district is committed to transparency and fair consideration of process,” said Dyson.

“The regional district will do it’s utmost to keep the people of the Comox Valley informed of this issue as we move forward, but it is in it’s very early stages at this time. We’re just reviewing the claim, but we will endeavor to keep our public informed.”

Grieve has not commented on the court action, or the points raised by the company.