Scientist who sealed himself in homemade biodome aborts experiment 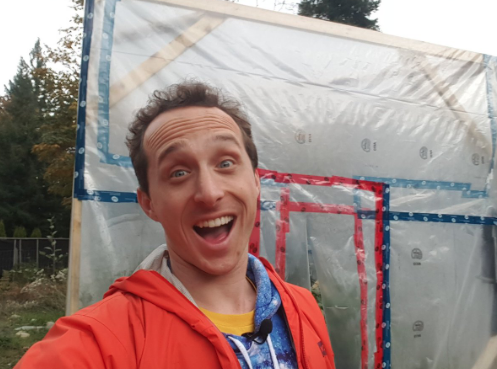 COURTENAY, B.C. – Kurtis Baute has had to end his experiment.

The scientist sealed himself into a homemade greenhouse at midnight on Wednesday, October 24th, as a way to raise awareness on climate change.

The biodome was on his brother and sister-in-law’s property in Courtenay, and contained a hammock for Baute, as well as close to 200 plants for oxygen purposes.

RELATED: Man to seal himself in homemade biodome for climate change awareness

According to a post on his Twitter feed, Baute said carbon dioxide (CO2) levels rose too high for his equipment to handle.

“Plants are great at soaking up CO2, they love the stuff…But they can only handle so much, and since it isn’t a bright and sunny day (it’s overcast) they aren’t getting the light they need…Which means CO2 just keeps rising,” he said.

Shortly after 12:00 p.m., Baute stated that CO2 levels dropped to 19.6 per cent Wednesday morning. They’re normally at 21 per cent, he said.

Just before 3:00 p.m., Baute tweeted that he had exited the biodome.

“All safe. My goal here was/is to engage people about #climatechange, and seeing the response on Twitter I feel like it’s been a huge success,” he stated.

“Thanks to everyone for your support. Now is just the beginning – it’s time to change our lifestyles.”

For more information on Kurtis’ other projects, visit kurtisbaute.com.