History made as new totem poles unveiled in downtown Courtenay 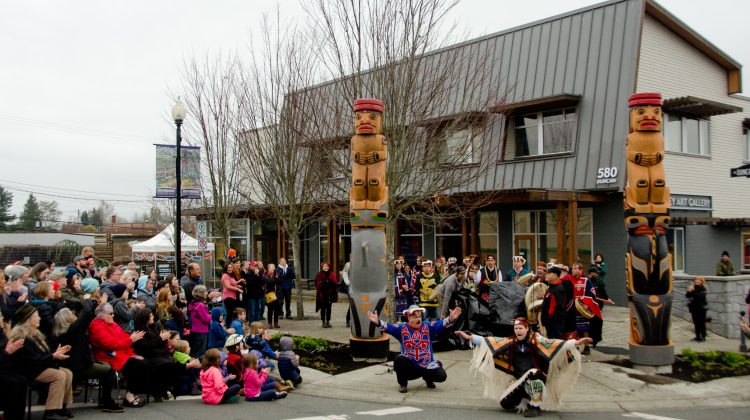 E'iksan hereditary chief Wedlidi Speck and K'ómoks First Nation carver Karver Everson react to the unveiling of the second totem pole outside the Comox Valley Art Gallery on the morning of October 27th, 2018. Photo by James Wood/98.9 The Goat/Vista Radio

COURTENAY, B.C. – A large crowd gathered at the intersection of 6th Street and Duncan Avenue for a historic ceremony Saturday morning.

“It feels wonderful for the community, and to come together in unity, with both non-Indigenous and Indigenous people here, I think it feels really good. It’s very reconciling,” Everson told MyComoxValleyNow.com at the unveiling.

Everson said the top figure on the pole is a guardian.

“It’s holding its belly, it’s full of wealth and I think it reflects the land that were on, how wealthy we are to live in the Comox Valley,” he said.

At the base of one pole is a finback whale, while a killer whale adorns the base of the second pole.

“That pays respects to the whale house. In the old days, four or five of our tribes would get together in a village near Quadra Island, and we would feast together. It echoes that unity that we all have,” Everson explained.

Courtenay mayor-elect Bob Wells was in attendance for the monumental ceremony.

“We really have a symbol in our community for reconciliation in action,” he said.

“We’ve done a lot of work with the K’ómoks First Nation over the last year or so, in particular working towards a water agreement at the (Comox Valley) Regional District. With the City of Courtenay, we do have an agreement to the area from across the Condensory Bridge. I think there’s a lot of hope and happiness. I think that’s what everyone is looking forward to.”

Wells said the unveiling of the poles is an example of strengthening relationships.

Wells added that there has been talks in the community of seeing a street name change to Duncan Avenue, to further commemorate the local First Nation.

“That would be something where we would want to sit down with the KFN and look to see what they would like to see. It’s definitely a conversation I’m more than willing to have with them, especially as we look at this area in front of the art gallery as potentially becoming a communal space or commons area.”