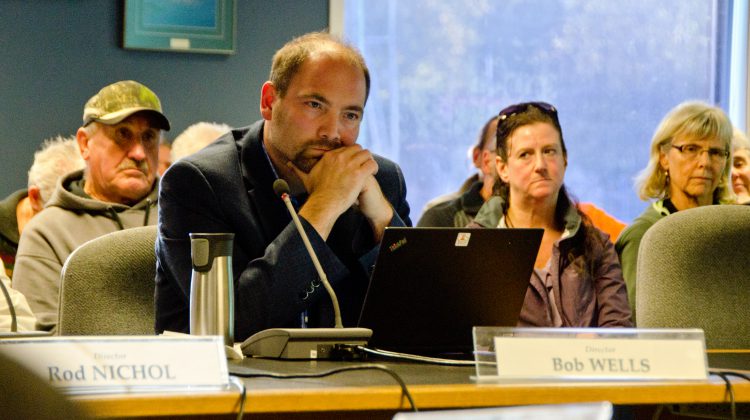 Bob Wells is pictured in a file photo from the CVRD board meeting on October 2nd, 2018. Photo by James Wood/98.9 The Goat/Vista Radio

COURTENAY, B.C. – Bob Wells is already hard at work, a week after being named the City of Courtenay’s new mayor.

Wells said he’s been speaking with councillor-elects to see where they would like to serve, including at the Comox Valley Regional District.

“It’s really (about) sitting down and looking at those appointments and looking at appointments beyond the Regional District, whether that be the Homelessness Coalition, and even the Arts Council, to make sure that we have those links to our community, which we don’t necessarily have at this point,” he said.

“When it comes to the CVRD, those are bigger appointments and at this point, I haven’t talked to everybody, so I can’t really say who wants to go where.”

Wells said he might take a similar approach to Comox and Cumberland.

“I meet with the last of the councillor-elects on Monday (Oct. 28), and at that point, I’ll have a much better idea of where people want to go and basically what’s going to work best for our community.”

Councillor-elect Doug Hillian has offered to serve for the CVRD, while Will Cole-Hamilton is also interested. David Frisch said he is very interested, and has been interested for the past four years.

Wendy Morin is said to be undecided, while Melanie McCollum wants to focus on her efforts at the council table.

Councillor-elect Manno Theos said that he values continuity for the first year of a new term, which is very important, and the CVRD has many projects of significance in progress at the moment.

According to the mayor-elect, final appointments have to be made by November 5th.