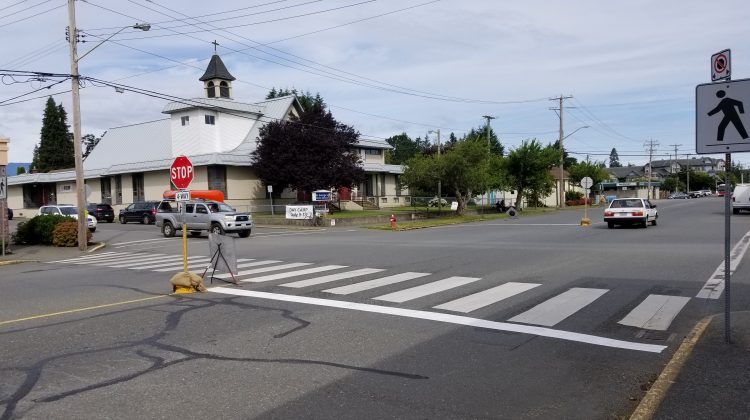 Two new stop signs have been installed at Fitzgerald Ave. and 6th St. in Courtenay. Photo by Justin Goulet/98.9 The Goat/Vista Radio.

COURTENAY, B.C. – It looks like the four-way stop at 6th Street and Fitzgerald Avenue in Courtenay will be coming down.

According to City of Courtenay spokesperson Lisa Zervakis, the temporary stop is set up to accommodate the ongoing 5th Street construction project.

That project is nearing completion, and Zervakis said that the stop will be removed once the work in the area is complete.

RELATED: Temporary four-way at 6th Street and Fitzgerald Avenue to come down with 5th Street completion

Courtenay mayor-elect Bob Wells said he’s heard that some residents would like to see the four-way stop become a permanent fixture on the road.

“It’s definitely a conversation we can have,” he said.

“That’s one of the things that we’re (Wells and his new council) going to really try to push is that engagement, seeing what people want to do and if that makes sense. At the end of the day, safety is always first. We’re going to have to look to the engineers and make sure that intersection is providing safe traffic and is not causing any unintended consequences.”

“I think right now, especially while we were working on the Complete Streets (Project), it was absolutely necessary. I travelled that road prior to the stop signs going in when that was the detour route, and it was a real challenge,” he said.

“If we find that it’s actually (resulting in) better traffic calming, making it so it’s a little bit more walk-able downtown, I think those are things that council is really interested in … making sure our community is one that people who are walking around feel very comfortable doing that.”