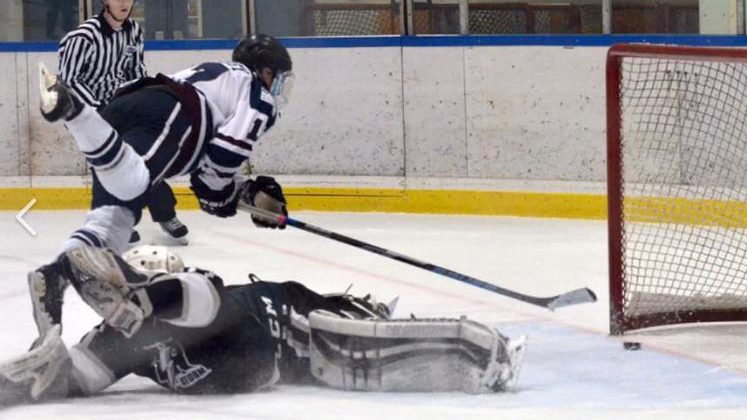 COURTENAY, B.C. – This was no ordinary monkey that head coach Jordan Kamprath and the previously winless Comox Valley Glacier Kings pulled off their collective back on Saturday night.

It was a rabid silverback gorilla.

Finally, 16 games into the season, Courtenay’s junior B hockey team has a reason to celebrate.

The local boys now have one overtime win, one overtime loss, and 14 regular season losses as they enter November.

“It’s amazing,” Kamprath said. “Monkey off the back… for the whole team included.”

He said everybody, including the players who were healthy scratches, celebrated in the dressing room after the win.

“It was an awesome feeling all around,” Kamprath said.

Considering both the OT win and OT loss came in the same weekend, the Comox Valley squad has a good reason to be optimistic.

“The build-up was there and everybody was looking forward to this weekend,” Kamprath said. “We had a great game down in Peninsula (a 3-2 loss to the Panthers), went into overtime there, got our first point of the season and then everybody was rolling into the game against Campbell River.”

The goal that ended the losing skid came on a clearcut breakaway as Finn Withey found himself all alone against Storm goaltender Jaden Little.

Kamprath spoke about how the play unfolded.

“He ended up losing his stick in the corner,” Kamprath recalled, about Withey.

“As he was picking up his stick they (the Storm) actually broke out and it was a three-on-two towards our zone. Our defenceman stepped up and poked the puck away. He was coming back trying to catch up to the play and was 50, 60 feet away from everybody else.”

There was just under 10 seconds to go in overtime when Withey collected a pass, broke in by himself, and, while airborne, tucked the puck past a sprawling Little.

The @CVGKhockey were full value for a 4-3 double overtime victory over the @CR_STORM . Here's the winning goal along with post game comments from GKings H/C Jordan Kamprath @JordanKamper pic.twitter.com/dQydQFrqDB

There were lots of indicators that the Glacier Kings were closing in on that elusive first victory.

“The games were getting a lot closer, everybody was getting a lot more confident on the ice, and we turned around and taking away a win from it,” Kamprath said.

This will be a challenging weekend for the Glacier Kings, who will be matched against the top two teams in the Vancouver Island Junior Hockey League’s North Division.

On Friday, they travel to Saanich to take on the 10-3 Braves and on Saturday, they host the Victoria Cougars at the Comox Valley Sports Centre. Game time is 7:30 p.m.