UPDATE: No charges laid after car drives through picket line 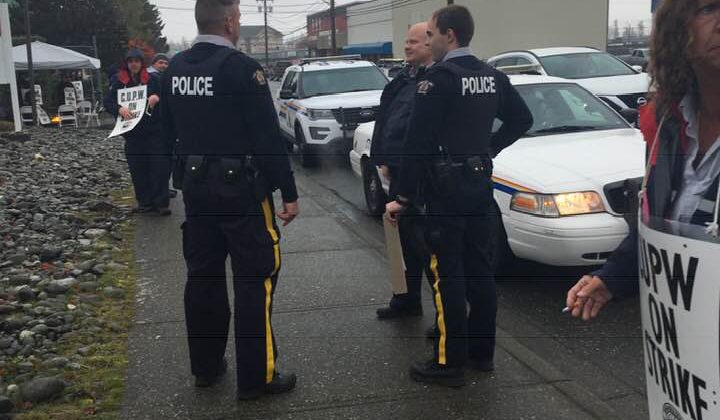 The police were at the scene on 1090 Ironwood St. after a man drove through the postal workers picket line. Photo courtesy of Chris Lyon, CUPW member.

UPDATE: The RCMP said they will not lay charges after an elderly resident drove through CUPW members’ picket line yesterday afternoon. Police said there was no indication of criminal intent, and the driver left after someone tried to open his passenger door.

CAMPBELL RIVER, B.C. – A car drove through a picket line of striking postal workers in Campbell River on Wednesday.

Canadian Union of Postal Workers (CUPW) Campbell River president Ryan Knight said was a shock to all the members when the man sped through, especially since it didn’t look like a serious situation in the beginning. The incident was at the picket line at 1090 Ironwood St, at 1:40 p.m.

“A gentleman pulled up to the picket line and wanted to drive through it… we said this is a picket line, you can park over there… our fight’s not with the public, so we were letting everyone walk across and get their mail if need be,” Knight said. “Instead of leaving, he just absolutely floored the gas.”

“He went irate, speeding through the parking lot and almost drove through our back fence.”

The two members who were hit do not have serious injuries. Knight said one member fortunately only has bruises on his leg where the resident’s car hit him.

The RCMP were on the scene gathering statements from the members, but Knight said they do not know if the man is going to be charged or not.

CUPW members are back to work today after their 24-hour strike.

Despite the incident, Knight said he felt positive about the public and other union’s support for them. He said he does not know how negotiations will go, but he remains hopeful.

The MyCampbellRiverNow.com newsroom reached out to the RCMP for further comment, but they have not responded to our request yet.

We also requested for videos or photos of the incident, but Knight said he did not feel comfortable airing publicizing footage as they show the union members’ faces.