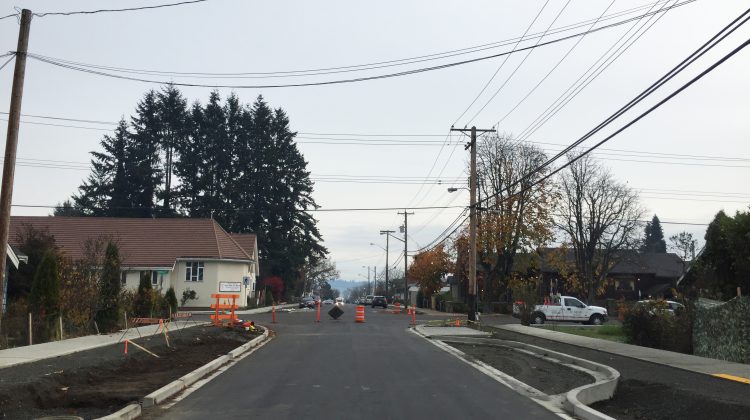 5th Street is pictured in a handout photo from the city.

COURTENAY, B.C- 5th Street will be re-opening this month, according to Courtenay’s municipal government.

A news release from the city state that a “flurry of finishing details” on the street’s project will be taking place over the next two weeks, with sidewalks, concrete driveways, and new signage being installed. Road markings are also being painted, along with the new asphalt bike path.

“Work on the new rain gardens is also underway, with planting to be completed after the Remembrance Day long weekend,” read the city’s statement.

“The Complete Street Project design is coming to life more and more every day and is expected to open in mid-November.  Working around the old infrastructure within the road has been a challenge this summer and unexpected ground conditions have impacted the final stage of completion, delaying re-opening.”

After the line painting and signage is finished, the route will be opened when construction crews are not on site.

“This will allow traffic patterns to begin to return to normal,” read the statement.

“For the protection of both work crews and the public, the road will be reopened to all modes of transportation when it has been deemed safe to do so for all concerned.”

The city thanked the public for their patience during the work.

The MyComoxValleyNow.com newsroom has reached out to the city for comment about concerns over the narrowed roadway.