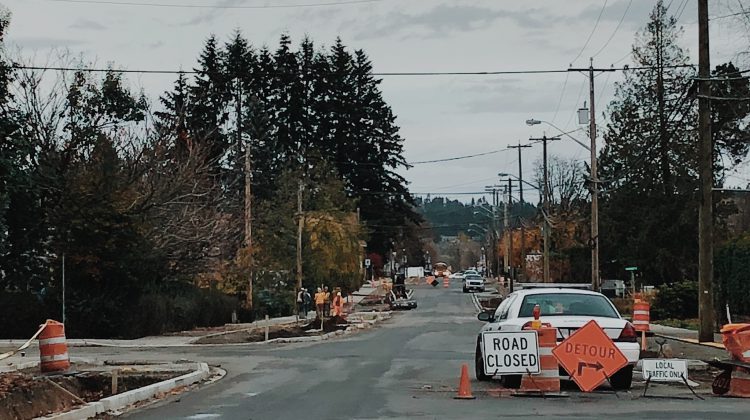 5th Street is pictured on November 2nd, 2018, looking east from the intersection of 5th Street and McPhee Avenue. Photo by James Wood/98.9 The Goat/Vista Radio

Over the next two weeks, final work including the installation of new signage, concrete driveways and sidewalks, will take place.

Road markings will also be painted and the new asphalt bike path will be completed.

“The (priorities) ones that came forward were pedestrian, cyclists and green spaces. To that end, we’ve designed the road, thinking how we can accentuate pedestrian (and cyclist) mobility and accesses … while considering vehicle traffic.”

Perry confirmed that all the traffic lanes were designed in accordance with the Transportation Association of Canada’s guidelines.

“The lanes are 3.3 metres wide, which is wide enough for two busses, two regular sized vehicles, fire trucks, to pass. They are wide enough lanes,” he said.

“I think that paint line down the middle … will make a big difference at the end of the day. People will actually be able to see where the lane is.”

Perry said narrowing the lanes will help with traffic calming, as the city has received concerns of drivers speeding down 5th Street.

He added that parking on the street has always been a part of the design.

“We did put all the parking back in there (between Fitzgerald and Harmston) at council’s direction. In terms of the section between Harmston and Menzies … we’ve implemented ‘parking pockets’. They are off-street parking areas for residents to park in. They are public parking areas, they are not assigned to residents, but they are located where specific residences have asked for on-street parking to remain.”

Perry said the ‘parking pockets’ should be finished within the next couple of weeks.

“The (on-street parking) is definitely limited from what we had before, but again that was based on the initial feedback from residents to have more green spaces rather than a parking lane,” he added.

Perry said once the paint lines and signage are installed, the city will “open (the street) up in the evenings”.

“The rain gardens need to be finished off, they’re still some planting to be done and there’s the restoration work behind the sidewalk on to private property, that still hasn’t been addressed yet. In talking with the contractor, they’re planning on doing that the week after Remembrance Day,” he said.

Perry noted that the city is hoping to have the road open towards the end of the week after Remembrance Day. On behalf of the city, Perry thanked residents for their patience.

“We do realize that this is a major inconvenience to not only residents, but a number of people within the city that use this route on a daily basis” he said.

“We are trying to get this done as quickly as possible, and we definitely appreciate the continued patience of everyone in the community.”