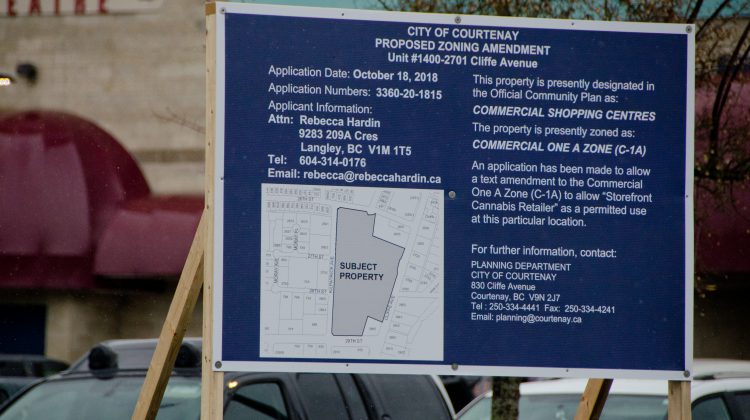 A notice sign for the application outside Courtenay's Driftwood Mall plaza. Photo by James Wood/98.9 The Goat/Vista Radio

COURTENAY, B.C. – A new recreational cannabis store could be setting up shop in the Driftwood Mall next year.

A storefront application is in the review process, brought forward by JAK’S Beer Wine Spirits.

“My primary business is JAK’S … when the opportunity came up for retail cannabis, we felt that due to our experience in the liquor industry that it would be a good fit for us to move into retail cannabis as well, since it’s a controlled substance,” said Mike McKee, the Community Outreach partner with JAK’S.

“We felt that the core values and brand promises of JAK’S, which are great customer service, outstanding selection and phenomenal in-store experience would lend itself well to our sister brand of MUSE Cannabis Stores.”

The shop would be located near the London Drugs in Courtenay’s Driftwood Mall.

McKee said they have already secured a lease with the mall’s landlord, and sent the application to the provincial government.

The province vets the applicants to make sure that there is “no association with the criminal underworld”, according to McKee.

“After they have done that background check, the application is then forwarded on to the municipality for them to vet it and make sure that it meets all of their local criteria,” he said.

“That’s where we are right now, we’re in (that) process with the City of Courtenay. After we’ve had the signs up for, I believe, two weeks, they come down, and we have an open house, which we’ll be hosting at the Filberg Centre on January 15th to (get) feedback from the public, and they can also see what we’ve got planned.”

McKee said talks with Courtenay city staff have been going well, and he’s optimistic about the project.

McKee is hoping to diminish some of the stigma around the retail cannabis industry.

“I think it’s important that people know that a lot of the existing dispensaries in Vancouver put a little bit of a black eye on what the retail brands will look like moving forward. We plan to run a very upscale, professional-type store, very similar to the JAK’S brand that we already operate,” McKee said.

The shop will be known under the brand name of MUSE Cannabis Stores.