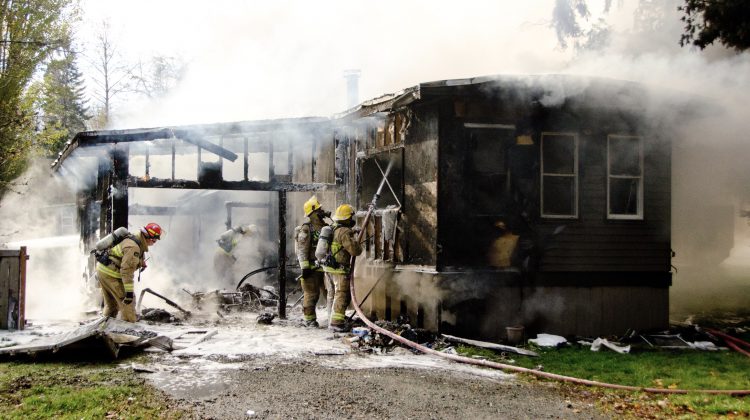 A trailer in Courtenay was destroyed by fire Monday afternoon. Photo by James Wood/98.9 The Goat/Vista Radio

COURTENAY, B.C. – A family is in shock after their trailer burned down in east Courtenay on Monday afternoon.

Scott Hennicke said his nephew’s family, which includes teenage boys, have been put up in a hotel by the Red Cross for a few days, and are left wondering what to do next.

Hennicke’s brother’s trailer that was situated next door was damaged significantly but is still livable.

“There are four in the one trailer, and their trailer is gone, and my brother… he’s going to be able to live in his trailer,” Hennicke told the MyComoxValleyNow.com newsroom. “We’ve just got to replace windows and siding and what have you.”

A GoFundMe page has been started for the family. Link to the page here.

According to the page, the family’s five pets and all of their belongings are gone.

“They lost absolutely everything… everything,” Hennicke said. “All they are left with is two vehicles and the clothes on their backs.”

Hennicke said the family is still trying to process what happened.

“I haven’t seen them a lot, but what I do see of them, they’re very shut down,” he said. “They don’t know what to think right now. They don’t want to talk to anybody – got to give them some time.”