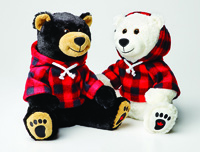 VANCOUVER ISLAND, B.C. – For close to 30 years, BC Liquor Stores across the province have taken part in their Share-a-Bear campaign.

Until Christmas, customers can purchase a stuffed bear to take home.

The bear’s twin is donated to a local shelter, hospital or other worthwhile charity to help brighten the holidays.

“For some families, these bears are the only gift their child may receive over the holidays,” read a release from the province.

The bears cost $11.70, plus tax. Over the years, almost 700,000 stuffed bears have been distributed to charities in the province.

More than 22,000 were donated last year. This year’s bears come in black and white, with each bear wearing plaid hoodies and imprinted with a maple leaf on their paw.

Customers also have the chance to enter a draw at BC Liquor Stores to win a larger version of the Share-a-Bear. Two winners will be drawn at each store.

In the Comox Valley, there are three BC Liquor Stores:

In Campbell River, residents can visit the following locations:

In the Tri-Port area, on northern Vancouver Island:

For more details on the campaign, visit www.bcldb.com/share-bear.