Mainroad Contracting sends out warnings ahead of hazardous winter conditions 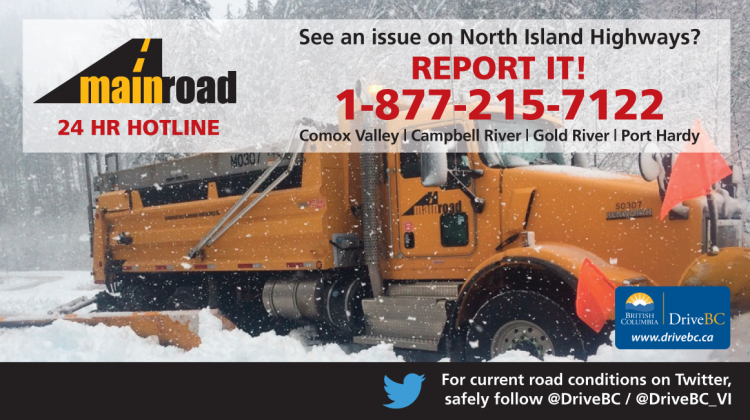 VANCOUVER ISLAND, B.C. – Driving in the wintertime can be very dangerous if you’re not prepared.

Mainroad North Island Contracting wants commuters to be cautious when getting behind the wheel this holiday season.

“The weather conditions as we know, in the North Island especially, can change very quickly. We experienced that just the other day, where we had forecasts for conditions to be bare and dry. Next thing you know, we were dealing with some frosty conditions,” said Leon Bohmer, Mainroad North Island’s Operations Manager.

Bohmer said the company is prepared to tackle the unpredictable weather.

“We have a fleet of trucks in the north area, and we now have 24/7 coverage. We just started our winter shift coverage,” he explained.

“The goal is to be out proactively in advance of any kind of frost conditions and ahead of any snowfall to pre-treat the roadways.”

Icy roads have been brought up as an issue for residents, particularly on northern Vancouver Island.

“We do a lot of patrols on the roadways. We’re going to work at being proactive to get ahead of things. We will also be using a great deal of brine, liquid brine application, which is a quicker way to treat the roadways,”Bohmer said.

“(We can have) a faster response once we are able to run around with the brine trucks to do that.”

Bohmer touched on an accident that sent two people to hospital on Monday, November 19th near Port McNeill.

The crash was reported to have happened between the 7-Mile landfill and just north of Port McNeill on Highway 19.

The incident shut down the highway between the lookout, north of the town, and the 7-Mile landfill.

“We’re really saddened to hear of the incident, and we actually had two patrols that went through there, one at 5:30 a.m. and one at 6:30 a.m. and the road was bare and dry, then we had quite a quick frost-over of the roads,” he said.

“We were out applying crystal salt to the road system but sadly we did not get to that section ahead of them (the victims).”

Bohmer emphasized that drivers should be prepared for changing conditions, and always travel with extra caution during the winter months.

“It’s important to be ready for winter conditions…people having good winter tires makes quite a difference,” he said.

“The more prepared you are, and (if you) leave yourself a bit of extra time (before your commute), that’s the goal…we’re gonna work very diligently at getting the roads to the safest conditions they can be. Saying that, there will be times where Mother Nature throws the systems at you and it can get slippery.”