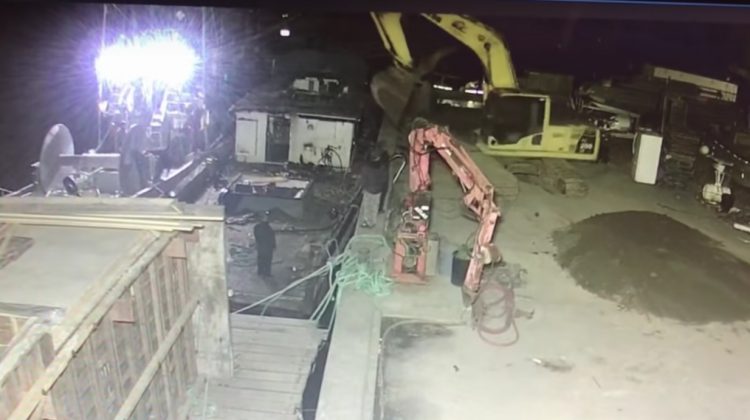 The ship in question was a fishing boat called the Northern King, which sank in Discovery Harbour Marina in Campbell River on January 13th, 2017.

According to the Coast Guard, pumps were used to re-float the vessel after the sinking. The Coast Guard reported on February 1st, 2017, that all pollutants had been removed from the boat.

The exact date of the removal is unknown.

“Removing of pollutants is one mitigation measure that can be done to ensure a vessel that is at risk of sinking does not pollute the marine environment if indeed it does sink,” read part of a statement from the Coast Guard.

“The Coast Guard did not receive any additional reports in either 2017 or 2018 about this vessel.”

However, a video posted to Youtube in November of 2018 is raising questions about what has happened to the vessel.

In the video, what appears to be the Northern King is shown getting filled with dirt or gravel at the side of a concrete wharf.

After the material is placed in the vessel, it is taken away from the wharf by what appears to be the Western Prince, another local vessel. The video ends just after 8 p.m.

The identity of the video poster is unknown, and the fate of the vessel is unknown at this time.

According to Environment and Climate Change Canada, an investigation into the Northern King is underway.

The video has been passed along to the Coast Guard.

The MyComoxValleyNow.com newsroom has reached out to Environment and Climate Change Canada for more information on the investigation.