Cumberland looking at barrier options after public trees run over 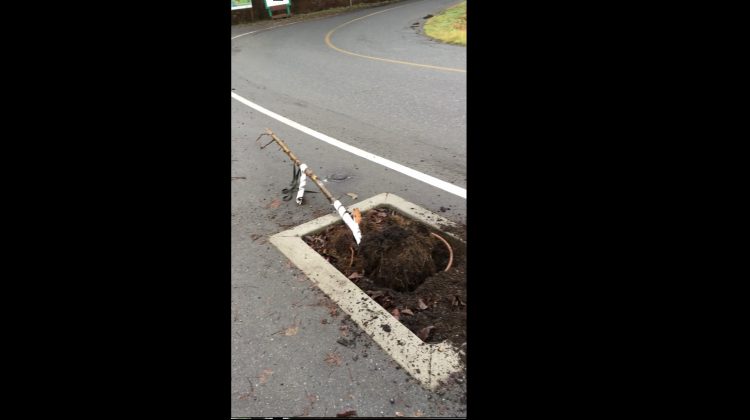 CUMBERLAND, B.C- A row of barrier trees in Cumberland have been destroyed, again.

The trees in question are located along the east side of Sutton Road, shortly before the curve onto Comox Lake Road.

The greenery was put in place to provide a natural barrier between the active roadway and a bike lane, and was previously damaged earlier in June. At the time, several trees were ripped out, though some were left without damage. They were replaced in September.

This time round, every single tree was damaged beyond salvage.

According to Sundance Topham, the village’s CAO, the vandalism took place on Friday night. The trees had been run over by a truck or Jeep, and Topham indicated a police report had been filed. There is no security footage of what happened available.

Topham stated that the village is now going to have to look at different options when it comes to separating the trees from the road, and give them more protection.

“We have to look into something,” said Topham.

“We’re not too sure (what) to be honest, because we were hopeful that people wouldn’t run them all over, but now that they have, we’re going to examine what we can do. Cost will be an issue, but safety is paramount.”

He also indicated the village is planning to keep the trees in place.

“We’re going to want to keep the trees there,” said Topham.

“The unfortunate part is that each time someone wrecks them it takes them longer to get established, but the idea is to have the trees there. We’re just going to have to figure out a better way to protect them.”

Replacement of the trees will likely take place in the spring, when conditions are better. He didn’t have an estimate for how much a barrier would cost, but believed the cost of re-planting would be around four or five hundred dollars.

“In terms of the person who damaged them, they could be drinking and driving or whatever. I hope it wasn’t intentional, moving forward, and the goal is to have more trees, not less, to beautify the area and make it safe. That’s what we’re going to keep trying to do.”