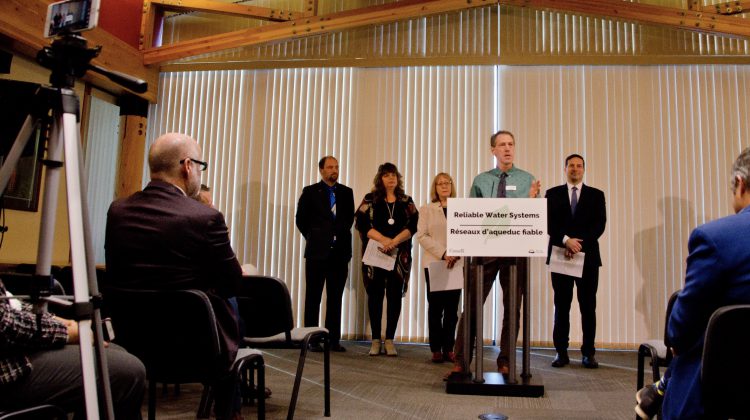 That’s according to Courtenay mayor Bob Wells, who also serves as the chair of the Comox Valley Regional District, speaking to the press after today’s funding announcement from the federal and provincial governments.

More than $62.8 million is being put towards upgrades for the district’s water system, which was announced today at the upstairs meeting room of the K’ómoks First Nation (KFN) band administration building.

Wells said the announcement was exciting, after four years of hard work. Boil water notices had often been a fixture of the Comox Valley due to turbidity in the winter, and the district had been taking steps to ward them off while working on the treatment plant project.

A UV system had been put in place by the CVRD earlier in 2018, as part of that work.

“Everything has worked out well,” said Wells.

“I’m so impressed with staff, and the water committee, all the hard work, effort that’s been put on, both provincially and federally to make this project move forward.”

Wells stated that an RFP for the project will be issued tomorrow, with construction planned to start near the end of 2019 and completion by 2021.

“This is the money that we asked for,” said Wells.

“We got every dollar we expected to get. In terms of the water project, this is it for us. Now it’s really about getting it done on budget and on time.”

The federal government was represented by Marco Mendicino, parliamentary secretary to Minister of Infrastructure and Communities François-Philippe Champagne, while Courtenay-Comox MLA Ronna-Rae Leonard appeared for Selina Robinson, the province’s Minister of Municipal Affairs and Housing.

Notably, the funding agreement between British Columbia and Ottawa was the first under the “Green Infrastructure Stream” of the federal government’s infrastructure-building plans in B.C. As for how the Valley got to be first, Mendicino stated it was due to “hard work and tireless advocacy”.

“It’s kudos to them (the advocates),” said Mendicino.

“One of the main principles of building infrastructure within our government is that we respect local decision makers, that is a principle we adhere to. We trust the expertise, we trust the people who are here in the community, and it’s because of that we’re able to do this happy announcement today.”

No penalties are expected for the district’s water license from Island Health if the project is completed on-schedule.