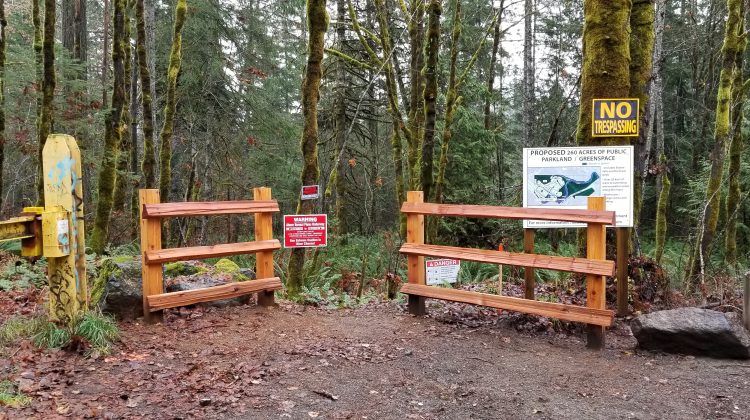 COURTENAY, B.C- People passing by Stotan Falls will have noticed some new fencing in recent days.

According to a press release issued by BC Hydro, crews from the power authourity are in the process of installing wooden fencing sections and safety signage at the two main parking lots of Comox Main Logging Road, close to the falls.

The signage is meant to advise the public that the river’s warning sirens will be turned off at night.

“We have sirens that activate from Comox Dam down to Puntledge Park when there’s a sudden change in Puntledge River flows,” said BC Hydro spokesperson, Stephen Watson, in the release.

“At night, we have the strobe lights initiating versus the sirens to provide that public warning, but there are no strobe lights at Stotan Falls because of the geography. So, in providing suitable public warning, the sirens at this one location have been activating as needed 24/7. Last spring, when we were releasing water at night, this was causing some issues for nearby residents. We try to ramp up river flows at night for public safety.”

The release indicates that BC Hydro began to look at ways to stop the sirens from running at night, while still maintaining public safety. The solution was an agreement with Timberwest, who holds the road right-of-way, as well as property owner 3L Developments Inc. to allow the installation of the fencing and signage at pedestrian openings.

The signage is meant to be noticeable, advising people that the sirens do not operate at night, and flows can change without warning.

“This combination and fencing and signage will continue to provide the public with notice, and at the same time, not have a siren initiate at 1:00 a.m. or so and disturb people,” said Watson, in the release.

“We think we’ve found that correct balance of community interests and public safety. Special thanks to TimberWest for assisting us on this issue.”

The release indicated that the warning sirens will be deactivated at night once the fencing is installed. The sirens will be able to activate during the day, and the nighttime de-activation will be re-programmed each season to follow shorter daylight hours.

The updated system was first installed in 2017/18, and an identical system is being installed at the John Hart dam in Campbell River.

Editor’s Note: Watson thanked 3L for their assistance after the first publication of this story, on December 31st, 2018.