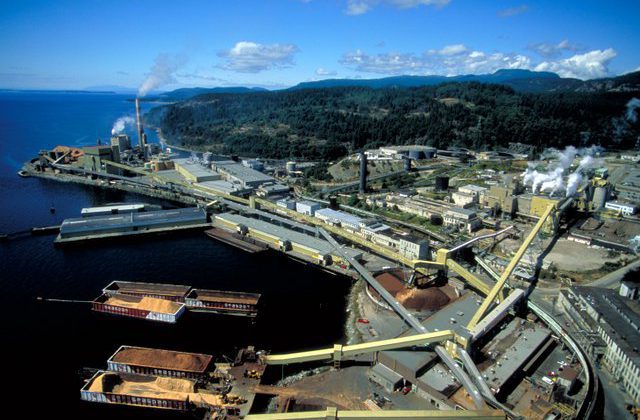 An aerial view of the Powell River mill. Image sourced from Catalyst Paper.

POWELL RIVER, B.C. – Catalyst Paper has announced that two of its machines have been turned off, as of last Friday, November 30th.

President and CEO Ned Dwyer said one machine at Powell River’s mill and one at Port Alberni’s mill have been shut down for a temporary ten-day period.

He noted that the temporary stoppage will affect around 140 employees at both mills, according to the company.

“The company is working to balance labour and production time to mitigate layoffs,” Dwyer said in a statement.

Dwyer also said the curtailment is due to the “sudden weakness in Asian markets”, where the company had increased its sales following recent U.S. trade actions.

“The shortage of economic fibre in the province and extremely high natural gas prices limit our ability to respond more effectively to these market-related changes.”

The company noted that the curtailment of the two paper machines will not affect existing customer orders or the company’s pulp production.